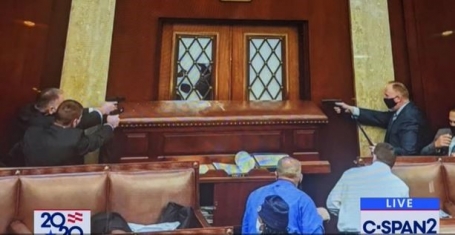 Update January 8, 2021: The FBI seeks tips from the public to help identify, arrest and prosecute participants in the insurrection which has resulted in several deaths incuding a police officer, dozens of injuries, widespread damage to the capitol, theft of federal property, and multiple bombs found in the vicinity. The FBI has posted numerous photographs of suspects which you can view at https://www.fbi.gov/wanted/capitol-violence.

January 6, 2021 (Washington D.C.) – San Diego’s Congressional representatives are safe, ECM confirms, after a terrifying takeover of the House and Senate chambers today by armed supporters of President Donald Trump. Legislators were evacuated and the capitol locked down after the insurrections stormed the building and forced their way inside.