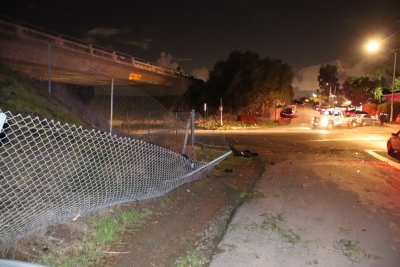 March 10, 2021(Casa de Oro) -- A car travelling westbound on State Route 94 in Spring Valley lost control around 8:30 tonight and veered off the highway and into a Casa de Oro neighborhood below.  Described on the CHP incident page as a silver Mitsubishi, the vehicle tumbled down a hill, crashed through a fence and continued across the intersection of South Barcelona Street and Buena Vista Drive, into the grounds of an apartment building at 9938 Buena Vista Dr. The vehicle plowed through a fence and hedges at the apartments but did not damage the building.

No other cars were involved.

The driver of the vehicle, a man in his 50s, was taken to the hospital by ambulance.

Law enforcement officers at the scene did not have any additional details regarding the accident, though some speculated that the vehicle might have f 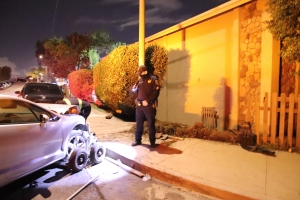 At about the same time, multiple shootings were reported at the intersection of Campo Road and S. Barcelona Street near an illegal marijuana dispensary, only a few blocks from the location of the accident.

It is unknown at this time if there was any connection between the two incidents, authorities indicated.