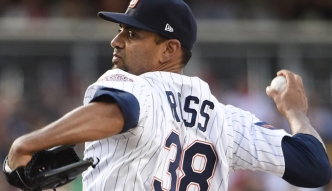 August 5, 2018 (St. Louis) - The St. Louis Cardinals announced on Sunday that they have claimed Padres pitcher Tyson Ross off of waivers.

Ross will join the Cardinals in Miami for their series against the Marlins next week.

In addition, the Milwaukee Brewers have claimed Jordan Lyles, who has a 4.29 ERA over 71 1/3 innings.