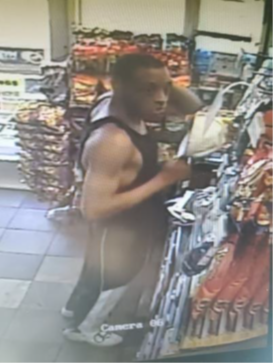 August 27, 2021 (La Mesa) – A suspect accused of striking an 82-year-old man on the head and carjacking his Jeep Cherokee in La Mesa yesterday morning is under arrest.  Tymody Wallace, 29, was arrested in Irvine on unrelated charges.

Around 9:25 a.m. yesterday, a La Mesa Police officer conducting a traffic stop at Grossmont Center Drive and Murray Drive heard the 82-year-old victim, an El Cajon resident, shouting for help. The officer immediately went to aid the man and learned he had been a carjacking victim.

Further investigation revealed the victim picked up the suspect in El Cajon, after the victim became disoriented and the suspect offered to assist him. The two traveled together to La Mesa, where an argument ensued inside the victim’s vehicle.

“The suspect struck the victim in the head and forced him out of the vehicle,” a press release from LMPD states. The suspect drove away in the victim’s vehicle and was last seen driving westbound on Murray Drive from Grossmont Center Drive.

The suspect was described as a Black male adult in his 30s, approximately 5’7” with a thin build and short hair. He was last seen wearing a tan t-shirt.

If you have any information on this case, please call the La Mesa Police Department at (619) 667-1400. You may also call Crime Stoppers’ anonymous toll-free tip line (888) 580-TIPS (or www.sdcrimestoppers.com). You can remain anonymous and be eligible for a reward of up to $1,000 for information.