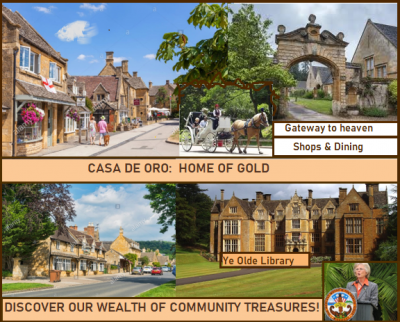 “In honor of Supervisor Dianne Jacob, and angel donor Irwin Jacobs, whose support and vision have made this all possible, we have chosen a Jacobian architectural style for the reimagined new heart of our community,” announced Bob Yarris, chair of the alliance. "And if Sara Jacobs wins her run for Congress, we may soon have a trifecta of Jacobs serving East County to honor."

Yarris elaborated, “We believe the richness of the English Jacobean era, which brought us the literary triumphs of Shakespeare and the discoveries of Galileo, are fitting for our vision for Casa de Oro’s future as a community rich in arts, culture, and creativity."

Supervisor Jacob praised plans for the new “Ye Olde Library” branch in Casa de Oro, a multi-story Jacobean-style facility that will also feature a community room, computer area for satellite tech workers and students, teen center and a children’s playground in the courtyard.  “This has truly been a learning experience,” said Jacob, a former teacher who served for 25 years as supervisor and is retiring at the end of this term.

Shops and stores in Jacobean yellow bricks, with affordable housing above, will replace the current hodgepodge of storefronts.  New zoning for the downtown district will oust tobacco shops, hookah bars and pot dispensaries.  The revitalized shopping district will includes treasures such as a British style brew pub, lawn bowling, galleries, gift shops, an English bakery, venues offering night life, and entertainment for all ages.

Horse-drawn carriages will ferry visitors and residents through the downtown district, which will also be designed to encourage walking, cycling, horseback riding and skateboarding.

The Casa de Oro Alliance unanimously voted to approve commissioning its first work of public art, a bronze statue of Jacob mounted on a horse. The statue will honor her equestrienne skills and her support for the community’s Renaissance, including a new riding trail along the outskirts of the Casa de Oro village.  At long last, Casa de Oro will live up to the meaning of its name: home of gold.