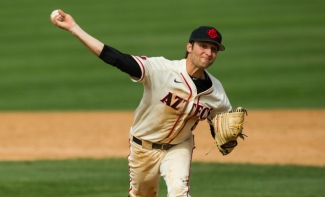 The Eastake HS product logged two saves in a series win over Cal State Fullerton this weekend, preserving SDSU's 6-3 win on Friday and 9-6 win on Sunday. Over his two appearances, Schmitt totaled three innings pitched and allowed just two hits while not surrendering a walk and striking out three.

Schmitt has become a mainstay in the back end of the SDSU bullpen, owning a bullpen-best 0.57 ERA. He has not allowed a run to score in each of his last six appearances and currently rides a 9.2-inning streak of not allowing an earned run, with his last earned run against coming close to a month ago on March 17 vs. Cal Poly.

On the year, Schmitt has thrown 15.2 innings, totaling three saves while accumulating a .175 opponent batting average. Schmitt has not allowed an extra-base hit this season. In addition to his relief duties, Schmitt has been SDSU's starting third baseman for the majority of the season, hitting .299 with a home run, four doubles, and 20 RBIs