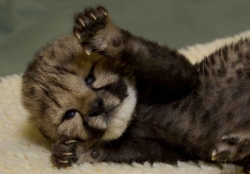 November 24, 2010 (San Pasqual Valley)--Kiburi, a 10-day-old cheetah cub, opened his eyes today (Wednesday, Nov. 24, 2010) at the San Diego Zoo Safari Park’s Animal Care Center. He took in the world, gobbled down a bottle, played for a little while, and then went back fast asleep in the window of the nursery.

Safari Park guests can see the 1.4-pound bundle of fur in the nursery’s window. While Kiburi, which means proud in Swahili, sleeps between 20 and 22 hours a day, he gets a bottle of special formula every 2½ hours and also has taken to playing and purring with an “adorable ferociousness,” according to a press release issued by the Park. At the nursery, Kiburi began “purring from Day 1,” said senior nursery keeper Sandy Craig.

Of the 134 cheetahs born at the San Diego Zoo Safari Park, Kiburi is the first to be born to two hand-raised parents, Makena and Quint. Makena gave birth to two cubs on Nov. 14, but the first one died shortly after birth of unknown causes. She then showed signs of abandoning Kiburi, so he was taken to the Park’s nursery. (It is common for cheetah mothers to abandon a single cub because there is a high mortality rate in cheetah cubs and it takes a lot of energy to raise even one.)