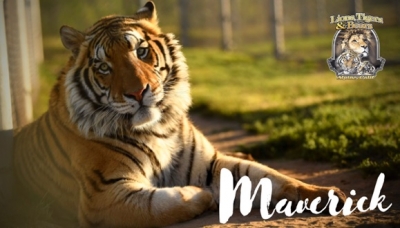 October 28, 2020 (Alpine) – A popular tiger named Maverick died this week in a tragic accident at the Lions, Tigers and Bears (LTB) facility in Alpine. Moka, another tiger, was accidentally let into the same habitat, fatally injuring Maverick.

Maverick came to the facility in 2014 at nine months of age after being rescued from the exotic animal trade and an owner who had acquired him illegally. Moka was rescued by Border Patrol agents and came to Lions, Tigers and Bears in 2018.

In a letter to supporters, LTB owner Bobbi Brinks voiced sadness at the loss and provided the following explanation: