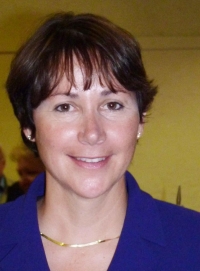 Only one candidate filled out information at SmartVoter.org. Laura Cyphert’s entry lists her goals as follows:
• Increase the influence of Lakeside in county matters
• Ensure the board proactively addresses significant projects, like the Sunrise Powerlink, before they are a "done deal"
• Make informed and well researched decisions in the best interest of Lakeside

Cyphert is a certified public accountant with an accounting degree from San Diego State University. Active in the Lakeside Chamber of Commerce, she formed the East County Community Action Coalition when she learned that “Sunrise Powerlink was planned in the last scenic view corridor in Lakeside.” The organization, founded to oppose Powerlink, now represents organizations with over 79,000 members. She said influence doesn’t come from merely having a seat on a board, but from “getting out in the community and building influence. “I look forward to being on the board and fighting for the people of Lakeside,” she said during a Lakeside candidates’ forum last Thursday night.

Only one other candidate for the Planning Group came to the Lakeside candidates’ forum.

Chad Enniss, incumbent, has lived in Lakeside for 53 years. “I’ve seen how difficult it is to get things done,” he said, citing “NIMBY’ (not in my backyard) attitudes as a problem. “I’m largely an industrial/commercial guy.” He believes his experience working on downzoning in the backcountry with the County’s general plan will encourage voters to support his candidacy.

Thomas Medvitz, in a Planning Group meeting on Powerlink last year, voiced opposition to that project. He urged community members to mobilize and oppose the high-voltage line through El Monte Valley. “You are the people,” he concluded, “and you have the power." He has no current voter info online that ECM could find.  But in a 2004 Smart Voter statement, Medvitz listed endorsements from the East County Association of Realtors, East County Construction Council, and East County Property Owners Association. That statement listed him as a retired executive with priorities that included support for controlled growth and proper balance of residential, commercial and industrial aspects of Lakeside to be incorporated into the County’s General Plan.

Emad Bakeer, incumbent, is simultaneously running for reelection to the Planning Group while also running for Lakeside Fire Protection District Board and Grossmont Healthcare District Board. It is unclear whether he is allowed to hold multiple positions under state law. He lists no information at smartvoter or e-voter for his planning group race, but does have his Fire Board statement listed at e-voter.com: http://california.evoter.com/search.

Mark Baker is past Fire Chief of Fire District Associations for California and San Diego. His long career in firefighting included Cal-Fire , Laguna Beach, Orange County and Palm Desert, according to his Linked In profile. Baker also owns a consulting company that provides services to fire departments. While Fire Chief in Lakeside, Baker spoke at a planning group meeting and testified that his district was never notified that Powerlink was planned for El Monte Valley, as required when a project that could impact fire safety is proposed.

The remaining candidates listed no voter information at SmartVoter or E-Voter, and a website search turned up no additional information. Neither the Republican nor Democratic Party of San Diego County has issued endorsements in this race.