Staff to prepare draft ordinance
By Janis Mork
June 26, 2012 (El Cajon)- At the El Cajon Council meeting today, one of the items on the agenda concerned changing the zoning requirement so El Cajon residents can own chickens in their own backyards. The public was able to voice their concerns to allow backyard chicken ownership. 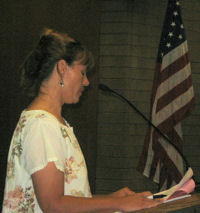 Next up was Lily Schworm, who was also in favor of keeping backyard chickens. She assured the Council, “chickens can be good stewards. They provide many benefits.” These include being an insect remover and a garden waste remover “They are organic food producers.”
Those last up to speak were two little girls named Fiona and Alice Fiona begged the Council to save the chickens, simply stating, “they make perfect pets.” Alice agreed, adding in that “chickens are fun.” She said how she’s read some books with pictures of kids with chickens, and it looks like fun.
Councilman Gary Kendrick, who introduced the measure, voiced his concern stating that backyard chicken eggs are a lot healthier with half the cholesterol. He said that the public deserves to have property rights, to raise chickens.
Councilman Bob McClellan stood by Kendrick. He agreed that property rights are important, but “we just have to draft the right ordinances. We’re more interested in personal-use chickens.”
Councilman Bill Wells added his own personal experience. Addressing Fiona and Alicia, he said he had a chance to be on his uncle’s farm and “it wasn’t all fun” because when he collected the chicken’s eggs, they would crack and he got a scolding. But “it was a good learning experience.”
Pro tem Mayor Tony Ambrose was open to the ordinance and was looking forward to adopting it.
Kendrick made a motion that the Council vote to ask staff to draft an ordinance allowing El Cajon  residents to raise chickens—but only hens; roosters will still be banned due to noise concerns.
When it was put to a vote, Ambrose, Wells, McClellan, and Kendrick voted in favor. Mayor Mark Lewis opposed.
Lewis, who cited concerns over Newcastle disease at a prior meeting, thinks it’s a health issue—and concluded that he prefers store-bought eggs instead.