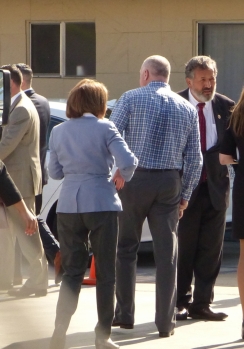 June 18, 2018 (El Cajon, CA) – San Diego Congressional members Susan Davis and Juan Vargas joined House Minority Leader Nancy Pelosi and other Democratic members of the Hispanic Caucus in touring three local facilities holding child immigrants, including a fenced facility in EL Cajon with 65 migrant boys, 10 percent of whom were forcibly separated from their parents by the Trump administration’s new “zero tolerance” policy of prosecuting all undocumented parents.  In the past six weeks, the federal government has acknowledged taking away over 2,000 children from parents at the border, including infants and toddlers.

“The United States should have a zero tolerance policy for the immoral treatment of children,” said Rep. Davis (CA-53), a senior member of the House Armed Services Committee whose district includes part of El Cajon. “We are a nation of values and we ask our men and women in uniform to defend those values every day. This policy is in no way consistent with those values.”