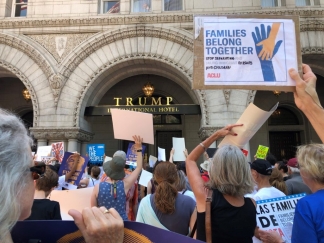 June 4, 2018 (San Diego) – Outrage is growing over revelations that the Trump administration has dramatically expanded the number of children being forcibly separated from their parents at the international border. On Friday, dozens o f protests were held in cities across the nation, NPR reports. The hashtag #familiesbelongtogether is trending on Twitter, showing thousands gathered at protests from Trump Towers to the nation’s capital.