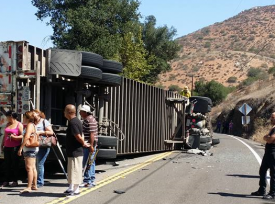 August 18, 2015 (Jamul) – On Sunday, we reported on a 10-hour closure of State Route 94 last Friday due to a head-on collision involving a semi-truck that left many local residents stranded and angry by the long delays.  Our story included documentation of numerous past lengthy closures on the highway in the Jamul area provided by the Deerhorn Valley Antler editor.We asked the California Highway Patrol and Supervisor Dianne Jacob for comments on this serious issue.

Supervisor Jacob responded,  “The public has every reason to be outraged, given the length of the closure, the dangerously high temperatures that day and the lack of communication from state authorities. I will be sharing those concerns with the Caltrans, CHP and other state officials. Drivers are already at risk on this dangerous and congested state highway, and the situation will become even more dangerous if a casino opens. Thousands of lives are at risk in the event there is a need for an evacuation of the area with nowhere to go."

Kevin Pearlstein, public information officer for the California Highway Patrol in El Cajon, today advised East County Magazine that the delay was due in part to the truck shifting and dropping part of its load.

"The truck was carrying a form of coal.  When the trailer opened up like a aluminum can it spilled everywhere," he said, adding that the prolonged road closure was due to cleanup of the coal spill.  The accident caused five injuries,two major and three minor to moderate, he added, and providing additional details:

According to Pearlstein, the crash happened at 10:20 a.m.  He said Sheriff deputies began assisting in traffic control at 10:49 a.m. and a SIG Alert was issued at 11:02 a.m.  (A SIG Alert icon did appear on the CalTrans map, but the incident was inexplicably not listed in the “trouble” areas section despite the 10-hour closure. Many members of the public, media and officials were not aware of the closure.

“At 11:54 a.m. the tow began to upright the semi,” said Pearlstein. “Unfortunately, the load shifted and poured out of the side of the trailer. At 1:11 p.m. they were attempting to open the road, but the tow was having difficulty.”

Motorists have advised ECM that the road did not open until  after 8 p.m. Some complained of inadequate notification, entering highway 94 after the crash occurred and becoming stuck in long traffic lines. Deerhorn Valley Antler reported concerns over motorists stranded for hours in 100 degree-plus heat.

The U.S. Border Patrol was running water to motorists waiting for the roadway to reopen, he said, adding that drivers were advised of alternate routes around traffic via Buckman Springs, I-8, Honey Springs Road, Japatul and other options.

He confirmed that an ambulance was advised of the closure and the emergency call for an unrelated patient was rerouted at 6:34 p.m.

As for residents’ complaints over lack of media coverage, Pearlstein has promised to inform East County Magazine via e-mail of future emergencies. (You can follow our EastCountyAlert on Twitter.com or sign up to get our alerts via email at www.EastCountyMagazine.org )   Pearlstein said he is aware of one media outlet, NBC7, that learned of the accidents and sent an alert.

As for how to prevent such long delays in the future, Pearlstein had this to say. “As you know, the 94 is a two lane highway.  At many locations there are no shoulders, it is just wide enough for two vehicles to share at the same time.  It is the mission of the CHP to lower the mileage death rate thru strict enforcement of speed, dui, and seatbelts.  Last year the El Cajon office had 60,000 enforcement contacts.  We will continue with our daily duties in an effort to keep drivers safe thru education and enforcement. “

phase in a ban on semis on that narrow road.