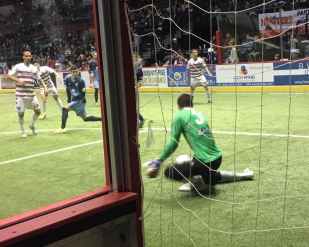 November 19, 2017 (San Diego)  – The 14-time champion San Diego Sockers (4-0) ended their three-game homestand with an 8-0 victory over the Ontario Fury (2-2) before a crowd of 3,401, the largest of the season. Goalkeeper Chris Toth made 16 saves en route to his first-ever shutout and the first for the Sockers in the MASL era. Matt Clare scored the club’s second consecutive hat trick to maintain his four-game scoring streak. Undefeated San Diego captures an early two-game lead in the Pacific Division.

Toth credited the defense in helping him achieve the clean sheet. “The guys played great in front of me and allowed me to see all of the shots clearly,“ said Toth. Of the 16 Fury shots, he was challenged twice on point-blank shots during the middle of the game.  Several times throughout the game, Ontario failed to capitalize on loose balls in the arc in front of an open goal. “I am going to enjoy this and also celebrate with my dad,” said Toth. His father is the legendary Sockers goalkeeper Zoltan Toth.

Chiles opened the scoring with his league-high 10th goal on an assist from Clare. He has scored a goal in all four contests this year. Max Touloute volleyed a Luan Oliveira pass into the goal for a 2-0 Sockers lead before halftime.

In the third period, Fury goalkeeper Jose Miranda let an Oliveira shot from the boards slip through his hands to give the Sockers a 3-0 lead. Minutes later Clare put his first of the game in the back of the net to extend San Diego’s lead to 4-0.

The Sockers dominated the fourth period and the only thing that was in doubt was if the team would keep Ontario off the scoreboard. San Diego used two power-play goals by Oliveira and Clare midway through the period. It was the second marker of the night for both players.  Erick Tovar’s goal at 10:19 was his third of the season. Clare added his third goal at 12:19 to conclude the scoring.

The power play was working for San Diego, as the team converted on four of their six chances on the evening. The Sockers killed off their only penalty of the contest midway through the second period.

San Diego returns to action after the holiday on Friday, December 1, 7:35 p.m. on the road in Tacoma. The Sockers play at Valley View Casino Center on Sunday, December 3, 5:05 p.m. versus Sonora. It will be SoCal Soccer Night and the first 2,500 fans will receive a free Sockers Team Poster, which they can have autographed after the game by the players on the field. Free parking is always courtesy of the team. Gates open at 4:00 p.m.