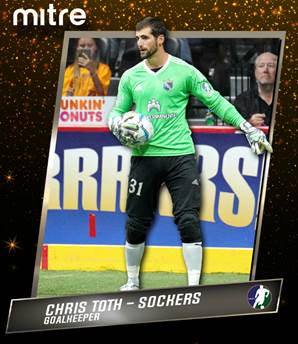 Netminder had another terrific season with the MASL’s best save percentage, second-ranked GAA and one shutout; son of legendary sockers goalkeeper has the inside track to being named the league’s Goalkeeper of the Year in back-to-back seasons

March 15, 2018 (San Diego) - One day ahead of the Conference Final Weekend, the Major Arena Soccer League (MASL) announced the All-MASL 1st Team for the 2017-2018 regular season. Goalkeeper Chris Toth, who now has the edge on being honored as the Goalkeeper of the Year, was the only Socker named to the team. Earlier this week, the MASL announced the All-Rookie and Rookie Honorable Mentions as well as 2nd Team, 3rd Team, and Honorable Mention All-MASL Teams.

Toth was part of the bets goalkeeper tandem in the MASL alongside All-MASL Third Team netminder Boris Pardo. The pair led the league in goals-against average. Toth had a spectacular season with the second-best GAA at 3.80 and one shutout. He won Game Two and the deciding Game Three of the Pacific Divisional Championship allowing only five goals in 75 minutes of play, and he also scored a goal from the red line in the first game to help San Diego force the Mini-Game.

Each team in the MASL was invited to submit a vote from their General Manager or Head Coach for the MASL post-season awards.

San Diego travels to Mexico to challenge Monterrey in the Western Conference Final on Sunday, March 18, 4:00 p.m., PT. The game can be seen live on MASL.TV or at Barrel Republic, Pacific Beach, for the Watch Party.