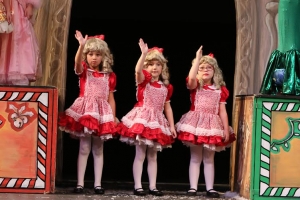 January 4, 2015 (San Diego)--Christian Community Theater of El Cajon delivered a charming and amazingly comprehensive Christmas experience to theatre enthusiasts performed this year at the Don Powell Theatre on the campus of San Diego State University from December 19th through 23rd, 2014, with the 21st Annual Traditions of Christmas, A Musical Spectacular. San Diego theater enthusiasts enjoyed an evening of holiday cheer in the form of musical theater, performed to a live band conducted by Ryan Beard. The entire show from beginning to end was an absolute delight for all ages.