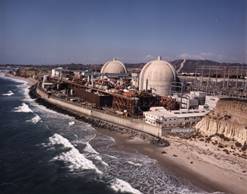 November 15, 2017 (San Diego) -- Ray Lutz, Founder of Citizens Oversight, announced last week that the "HELLMSS-MELO Proposal" will be submitted as a component of a petition to the Nuclear Regulatory Commission (NRC), calling for a national moratorium on the use of thin, single-wall nuclear waste canisters.

According to the nonprofit organization’s press release, HELLMSS-MELO means Hardened, Extended-Life, Local Monitored Surface Storage, using the Monitored Extended-Life Overcask, which is an additional layer to be added over the "thin" canisters in use today, which were never intended for long-term use. The HELLMSS-MELO plan targets safe surface storage for 1,000 years instead of the 60 years being planned by the industry, and proposes that we give up on a geologic repository for now and move the spent fuel only as necessary, to avoid water resources and dense human population.

Ray Lutz explains, "The thin cans being used today to store nuclear spent fuel are far from adequate, with only 20 year license and 60 year design life. These containers were not designed for long-term "indefinite" storage they have now approved. Stress corrosion cracking was not considered an issue when these were first adopted, but today, it is recognized as a major problem. Their reaction is "aging management" which relies on the industry to police themselves. Single layer means a radiological emergency results if it is compromised. We MUST have a two-layer system, and we must move the waste away from delicate coastal zones with excessive corrosion risk."

To see the plan, please visit this web page: http://copswiki.org/Common/HellmssMeloProposal

Citizens' Oversight is looking for people and organizations who will endorse the plan as it is submitted to the NRC later this month. Please contact Ray Lutz to include your organization in the NRC filing.