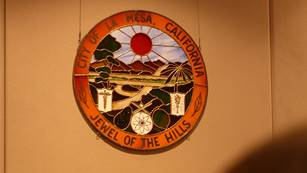 October 9, 2019 (La Mesa) - On Tuesday, October 8, 2019, the La Mesa City Council approved the Livable La Mesa Action Plan to promote programs and systems-level change that will strengthen the quality of life for older adults in the community.

According to the City of La Mesa, the number of residents over 65 will increase by 13 percent by 2030. As a result, La Mesa launched the Livable La Mesa initiative, thanks to support from The San Diego Foundation Age-Friendly Communities Program, to guide planning to meet the needs of the growing population of older adults.
The Livable La Mesa Action Plan outlines the goals, tasks and timeframes to be accomplished over the next few years to help make La Mesa a more livable community for all ages, particularly the City’s older population.
“I am very proud to support the Livable La Mesa initiative and the Action Plan that will pave the way forward for our region,” expressed City of La Mesa Mayor Mark Arapostathis. “We aim to be a city that meets the challenges and opportunities of an aging population, so all ages can participate in a fulfilling community life and enjoy robust health and well-being.”
The City of La Mesa launched the Livable La Mesa project through AARP’s Livable Communities Initiative with technical assistance support from The San Diego Foundation Age-Friendly Communities Program in fall 2018. The initiative is an affiliate of the World Health Organization’s Global Network of Age-Friendly States and Communities, an international effort launched in 2006 to help cities prepare for their own and the world’s growing population of older adults. Currently the global network includes over 41 countries and 847 cities, including nearly 400 in the U.S. alone.
Livable La Mesa planning team members worked diligently with the community for the past twelve months to create goals and objectives that will improve the health and well-being of La Mesa residents of all ages. After engaging with residents in online surveys and community conversations, the baseline assessment pointed to six key domains of livability most relevant to La Mesa. The domains include, outdoor spaces and buildings; social and civic participation; housing; transportation; community information; and health and wellness. These domains will become the framework for programs and policies enacted across La Mesa in future years.
“The San Diego Foundation is proud to support the City of La Mesa and other municipalities working to create a more age-friendly region,” shared Peggy Pico, Manager of the Age-Friendly Communities Program at The San Diego Foundation. “We want to create a region where adults can stay connected to their communities and remain independent and meaningfully engaged throughout their later years.”
The Livable La Mesa Action Plan was developed thanks to significant resident participation; staff participation from all City departments; input from the Community Relations and Veterans Commission and Community Services Commission; and ongoing assistance from partners at The San Diego Foundation, County of San Diego HHSA, Circulate San Diego, San Diego State University’s Social Policy Institute and AARP.