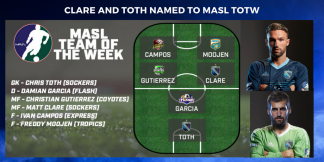 November 21, 2017 (San Diego) - The 14-time champion San Diego Sockers placed two players on the week four MASL Team Of The Week (TOTW). Matt Clare and Chris Toth were honored for their performances in Sunday’s match against Ontario. It is the third consecutive week that the Sockers have had a player on the TOTW. Brandon Escoto and Luan Oliveira were honorable mentions.

Clare had his first hat trick of the season in San Diego’s 8-0 win over Ontario. He also added an assist to increase his season point total to 10, good for second on the team behind league leader Kraig Chiles (13).

Toth made 16 saves during the game to earn his first career shutout. He lowered his goals-against average to a league-leading 2.50. Toth also leads the MASL in save percentage (.833) and wins (2).

The MASL Team of the Week is selected using the Stars awarded at each game and by soliciting nominations from each team. Players nominated by teams were each awarded three points and stars were awarded 3 points (1st Star), 2 points (2nd star) and 1 Point (3rd star) respectively.