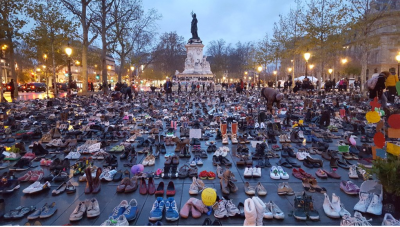 “We are at the limits of suicide.” – Pope Francis

“Our nations share a sense of urgency about this challenge and a growing realization that it is within our power to do something about it.” – U.S. President Barack Obama

November 30, 2015 (Paris) –Around the world, an estimated million people took to the streets to call for action to save the planet as world leaders convene today in Paris for an international climate summit. But in Paris, where large public gatherings are banned due to a state of emergency declared after the Nov. 13 terrorist attacks, thousands of Parisians instead brought their shoes, lining them up along the march route in a silent yet powerful expression.

French President Francois Hollande said he cannot separate the “fight with terrorism from the fight against global warming,” adding that leaders must face both challenges to leave children “a world freed of terror” as well as one “protected from catastrophes.”