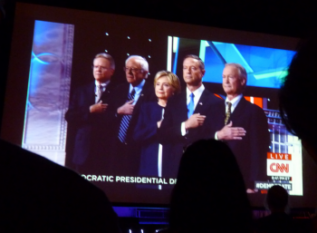 Photo: Big-screen at debate-watching party hosted by the Sanders campaign in San Diego at a Hillcrest theatre, where a crowd of about 500 people turned out.

The spotlight and lion’s share of questions focused mainly on the two front-runners, Clinton and Sanders.  Major post-debate polls showed Sanders winning the debate, followed by Clinton, with the other three candidates trailing in single-digits, though many media pundits placed Clinton ahead. Moderator Anderson Cooper and other CNN journalists peppered candidates with questions challenging their perceived vulnerabilities as well as stances on key issues. CNN also posed questions from voters across the country. Here are highlights: