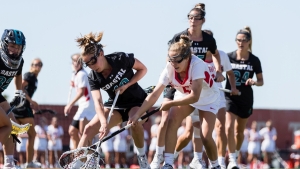 The Chants took the lead early with a 5-0 run in the game’s first 11 minutes and an 11-3 run in the matchup’s first 32 minutes of play. Down 11-3, the Aztec surged back with a 5-0 scoring run of their own led by two scores from Jones and one score a piece from O’Donnell, Brown, and Young. With the score at 11-8, the Chanticleers and Aztecs would go back and forth for the rest of the game. In the final 23:21 of play, both teams did not allow more than two consecutive goals to be scored by their opponent.

Caitlin Jones’ four goals are the sophomore’s first scores of the 2021 season and her four points on the day were the most points scored by the sophomore since Feb. 22, 2019, where she had four goals in the Aztecs’ 20-16 loss to USC on The Mesa.

SDSU continues a two-game homestand on April 4, welcoming the California Golden Bears to San Diego for an Easter Sunday high noon contest. The Aztecs and Golden Bears have already met in the 2021 season, as the Scarlet and Black scratched out a last-minute 12-11 victory in Berkeley on Feb. 28, 2021. The Scarlet and Black have not won a matchup since their victory in the Bay Area.