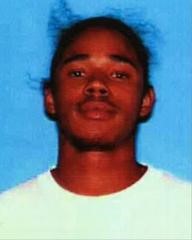 On March 19, 2005, deputies were called to the 8000 block of Lemon Grove Way. When they arrived, they found Gibbs lying in the driveway after being shot.

Witnesses say Gibbs and some friends were talking in front of an apartment complex when they were approached by two men with guns Gibbs was shot while trying to get away. He died from his injuries.

The suspects took off on foot. They are described as:

Suspect #2: African American man around 18-years old standing 5'10" tall and weighing 160 pounds with a short hair cut and clean shaven. He was wearing a gray hooded sweatshirt and blue jeans.

You can help bring Gibbs' killers to justice. Anyone with information is urged to call the Sheriff's Homicide Detail at (858) 974-2321.