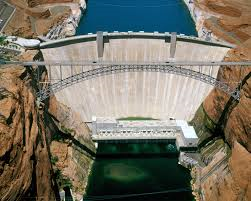 January 25, 2014 (San Diego’s East County) – For the first time ever, the U.S. Bureau of Reclamation has ordered that supplies of water from the Colorado River and Glen Canyon Dam be slashed.

The Colorado River is the most important water source for the Southwest-- and it accounts for about 60 percent of San Diego County’s water supply.  It’s under increasing pressure from a growing population in southwestern cities  amid extended  dry conditions.

"This is the worst 14-year drought period in the last hundred years," said Upper Colorado Regional Director Larry Walkoviak in a Bureau of Reclamation press release.

The federal government will cut water released from  Glen Canyon Dam at Lake Powell by 750,000 acre-feet this year—enough water to supply three quarters of a million homes.

Even with that reduction, the Colorado River will still be 9% below the 8.23 million acre feet that has customarily been supplied to Lake Mead for use in turn in California, Nevada, Arizona and Mexico under the Colorado River Compact of 1922 and other agreements.

Water levels at Lake Powell have dropped 35 feet in the past year alone.  Last August, Lake Powell was at just 45% of its capacity – and since then the water level has fallen at an alarming rate of one foot every six days.

San Diego water officials have been working to develop alternative water supplies including local projects such as the Carlsbad Desalination plant now under construction, but the steep cuts in our region’s largest water supply – the Colorado River –will put the squeeze on local water users and emphasizes the importance of conserving water, our region’s most precious resource.