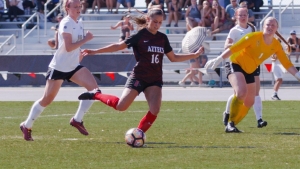 September 27, 2019 (Laramie, Wyo.) - The San Diego State Aztecs scored a pair of second half goal within a minute of each other, but it wasn’t enough for a comeback victory as SDSU lost in its Mountain West Conference opener 3-2 to the Wyoming Cowgirls.

The Aztecs out shot Wyoming 18-to-6, with the 18 attempts a season-high.  It was the third time this year SDSU has out shot its opponent, but in those games the team has just a lone victory, 1-0 against LIU on August 25.

Down 3-0 in the final 10 minutes of regulation, the Aztecs strong offensive play was finally rewarded.

At the 81:35 mark, Rachelle Elve hammered a shot from the left side of the 18 which deflected off a defender.  It came to the foot of Darcy Weiser, who despite not playing in the team’s first seven games, knew exactly what to do with it.  She slotted it inside the right post for her first goal of the year and broke a 308:13 scoreless streak.   The last goal prior to Weiser’s came from Kiera Utush, who scored at the 43:22 mark against Miami (Fla) on Sept. 7.

Less than a minute later Chloe Frisch took a ball in the midfield, drove to just inside the 18 and slid a pass around two defenders.  Taylor Moorehead ran onto the ball and placed it past the Wyoming keeper to get the Aztecs to within 3-2 at the 82:27 mark.

Moorehead joined Weiser in scoring her first goal of the campaign and both Frisch and Elve picked up their initial assists of the season on the respective goals.

Coming out of the intermission, Wyoming (4-2-3, 1-0-0 MW) got more aggressive and turned that into a pair of goals.  At the 49:20 mark, the Cowgirls got a header off a corner to score the games initial goal.  Three minutes later they doubled the lead when they picked up a loose ball about 30 yards out.  They drove to the left side, averted SDSU keeper Brooke Lisowski who was charging off her line, and took a shot which deflected off the cross bar and in.

What proved to be the Wyoming game winner came in the 80th minute. Mikayla Stark grabbed a loose ball and drove down the left side.  She out muscled an Aztec defender about 25 yards out and took the shot just before Rachel Speros, who was sprinting from the other side of the field, could reach her.  The shot went into the upper corner to make it 3-0.

Frisch led all players with five shots.  Weiser, Moorehead and Laura Fuentes were credited with a pair of shots each.  Macy Horn, Malia Kaleiohi, Kiera Utush, McKenna Wallace and Rachelle Elve each produced one shot.  In goal, Lisowski had one save and surrendered each of the Cowgirls goals.

Wyoming had six player take a shot each and Riley Furbush played the second half, gave up two goals and made three saves in earning the victory.

The Aztecs return to action on Sunday on the SDSU Sports Deck.  SDSU hosts Colorado State in its conference home opener with kickoff scheduled for 12:00 p.m.