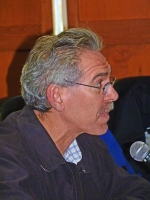 March 2, 2011 (La Mesa) – Members of the newly formed East County Tax Hawks swooped in to address Helix Water District’s Board this afternoon, demanding changes to the District's memorandum of understanding (MOU) regarding public employee pensions and benefits.
“A sleeping giant has been awakened,” David Smyle, co-founder of the Tax Hawks, said of taxpayers. He noted that Helix has twice raised water rates to the public in recent years while raising employee compensation and boosting benefits to levels higher than in the private sector. He also faulted the Board for not requiring employees to contribute to medical coverage and for approving a long-term contract, among other issues.
“What in the world makes you think that this would be okay for ratepayers?” he asked.
Dan McMillian, former director of Padre Dam Municipal Water District and a ratepayer in the Helix district, urged the board to hire an outside labor negotiator to represent ratepayers.
“The Board could show some leadership by paying at least 65% of their insurance costs, plus review the outside meetings that are educational versus just plain fun,” he said, referring to the Board compensating directors to attend various conference, public meetings, and other functions.
The Tax Hawks submitted a list of demands that include:
·         use of outside negotiators to represent ratepayers,
·          limiting duration of all future MOUs to one year, comparing compensation and benefits to private sector and other public agencies (not just water agencies),
·         requiring employees to pay 8% of CalPers pension costs, place future hires on a pension alternative that would still allow career employees to retire with around 90% of previous compensation,
·         eliminate contribution to a 401(a) plan since employees already get Social Security and a CalPers pension, and reduce holiday, vacation and sick days to be private sector employee benefits
·         make employees  contribute to cost of medical, vision and dental with at least a 25% contribution for employees and 50-100% for dependants;
·         stop reimbursing Board members or employees to attend events or have membership in groups not directly water related or beneficial to ratepayers, and limit the number of board members attending water meetings;
·         develop a plan to payback the District $13.5 million in unfunded CalPers liability;
·         read the Little Hoover commission Report, aka Public Pensions for Retirement Security at www.lhc.ca.gov.
Comments were presented in public session, and under rules governing public meetings in California the Board could not comment.   This is at least the second time that Tax Hawk representatives have testified calling for changes, however thus far the Board has not placed the item on the agenda for full discussion at a future meeting.
McMillan, speaking to ECM after the meeting, said he has met with Ray Lutz, founder of Citizens Oversight. Though the two are on opposite sides of the political aisle on many issues, McMillan said they  found agreement on the need for better public input and oversight. “We need legislation to require that if a minimum of five people request that an item be put on the agenda, a board should be required to agendize it,” he concluded.

A request for comment from the District's labor unions was not returned as of press deadline today.

Update March 3, 2011:  The district has issued the following statement regarding the MOU:

"We appreciate your interest in the Helix Water District’s Memorandum of Understanding renewal negotiations with employee associations.  These negotiations are held in closed session and are confidential.  The Board of Directors represents the ratepayers in these negotiations and sets policy for the District.  The Board has appointed negotiators to represent the Board in negotiations with the employee associations.  It is inappropriate for the Board Members andBoard-appointednegotiators to make any public statement regarding these confidential proceedings. We are honoring this commitment and therefore decline to provide any information or opinion regarding the items under negotiation."

Regardless of the cause it is ignorant to assume that there is some sort of rational believable argument against paying taxes when the government is hugely in debt.
Kalos @ BTscene torrents

Too bad after all the cuts are made on the Helix employees benefits it's NOT going to reduce water rates. Too bad rates are going to continue to increase regardless of what good you think your accomplishing. Too bad people keep moving to San Diego county, and as all Americans know (if you payed attention in economics class) its a supply and demand world. By my calculations however, water is actually incredibly cheap. LISTEN UP, 1 unit of water is 748 gallons. The average household uses around 20-30 every two months. Time to do the math. THATS .003cents per gallon!! 1 penny buys you almost 3 gallons of water. Stop waisting your time fighting to save people what will amount to .30-50cents a month (which you'll never see due to rate hikes). Furthermore, look at the city of San diego. Their infrastructure is horrible and their employees are notoriously bad. Living in El Cajon I have dealt many times with the Helix employees and personally know that many of them live paycheck to paycheck. JUST LIKE THE PRIVATE SECTOR!! And just a quick FYI, they cant make their rent/mortgage payments with their medical or their sick leave. Do your homework and compare apples to apples. Compare an underground construction worker in the private to a public servant. You'll find the private pay's MUCH more than public. Helix employees care, are friendly, and respect those whom they work for. If you dont respect that, shame on you.

It's important to see how proposals such as this impact employees, as well as ratepayers.