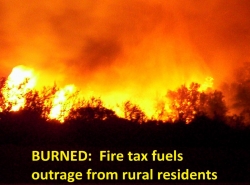 July 13, 2011 (Campo)--I can vividly describe every one of the four fires that has burned through my property over the past 25 years. Notably, every one was started by someone who doesn’t live here. Causes include burning objects thrown from passing cars and trains, illegal fireworks by drunk Navy men, and border smugglers intent on their own agendas.

Also notable is that my family’s home survived every fire because of our personal efforts -- both costly and time-consuming -- to plan and execute our own defenses. Not a single fire department, including CalFire, has ever managed to arrive at my house before the fires did; the distances are simply too great and the fires too unpredictable.

We are typical of most backcountry homeowners, in that we are highly aware of fire risk and take responsibility for protecting ourselves from it. So you can imagine my reaction to the warm approval some folks in town have expressed for the $150 annual fire fee that the state’s governor and legislative majority have decided to impose on our politically impotent rural minority.

The governor signed that fee into law Friday as part of the so-called balanced budget that Democrat lawmakers passed unilaterally so they could get their pay reinstated. They passed this fee on private property owners with the claim that rural residents receive a “disproportionate benefit” from CalFire’s efforts and that the presence of our homes in the rural region interferes, in some way, with CalFire’s ability to fight fires on “state responsibility lands” – a term that apparently applies to private property, rather than just land the state actually owns.

State officials estimate that the fee will be assessed against some 850,000 properties in California, which would generate about $128 million a year at the initial cap of $150. According to the bill, the money would be put in a State Responsibility Area Fire Prevention Fund to be spent on fire prevention activities, such as property inspections, fire hazard mapping, public education and grants for other jurisdictions and organizations that provide similar services.

These are all activities that CalFire’s regular budget has covered in the past. The bill does not return any of the prior cuts the governor has made to CalFire, including the fourth firefighter that was budgeted off of CalFire’s engines several months ago.

The current budget has already allocated $50 million from that yet-to-be-collected fund and there is a proviso for the money to be used for other things if the legislature sees fit to redirect it.

Collection is expected to commence within the next six months. If a property assessment is not paid within 30 days of its issuance by the board of equalization, a penalty of 20 percent will be added for every month that it remains unpaid. This is in addition to penalties and collection procedures outlined under the state revenue and taxation code.

The Howard Jarvis Taxpayer Association is still mulling over whether to file suit on this fee. In my opinion, it would have an easy win because the sheer illogic – nay hypocrisy – of the state’s “disproportionate benefit” argument for this fee has constitutional holes in it big enough to drive a fire truck through.

State and county policies, not rural residents, have fueled the growing problem of monster fires in the urban-wildland interface – which, by definition, is located next to cities like San Diego, Chula Vista and Escondido, all of which permit high-density development on their outskirts with no defensible space around it. These are not the people who would be paying this fee.

Yet, urban folks and urban-dominated permitting policies cause most wildland fires--and the urban sector is more at risk from them than traditional low-density rural communities. Witness the fate of suburban neighborhoods in Scripps Ranch and Lakeside that burned in the 2003 wildfires. Those places aren’t in the state responsibility area, but they receive CalFire protection, nonetheless. Remember, as well, who started that fire – a wanna-be hunter from West Covina who was so scared of the dark that he started a signal fire in windy conditions to try to get himself found. He wasn’t a rural resident either.

In fact, the urban-wildland interface is not, by definition, located in rural communities at all. In traditional rural communities, the homes are widely spaced and the residents already maintain defensible perimeters around their homes – perimeters that help, not hinder, firefighters’ efforts.

The only exceptions to this rule are where the state has mandated nightmarishly dangerous electrical transmission and generation facilities, and where both the state and the county have forced rural communities to host high-density enclaves like Campo Hills, Star Ranch and San Diego Country Estates. Why should we be forced to pay protection money for risk factors that were placed in our communities by government policy?

The justification for this fee is fallacious in other ways, as well. CalFire’s mission is completely general to California as a whole. From its mission statement: “The Department of Forestry and Fire Protection protects the people of California from fires, responds to emergencies, and protects and enhances forest, range, and watershed values providing social, economic, and environmental benefits to rural and urban citizens.” That really doesn’t sound like an exclusively rural benefit.

Though it is not a structure protection department, CalFire responds to all fires everywhere, including the outskirts of cities, because that’s what all fire departments do. Every department, from community volunteers and city departments, on up to the federal agencies, has mutual aid agreements with every other department in the region. That also doesn’t sound like a disproportionate benefit.

The proposed fee makes no exception for residents in counties that already fund large swathes of CalFire’s budget. San Diego County already gives CalFire $15 million a year for structure protection assistance, in addition to funding the community resources that CalFire now has control of. It looks to me like the unincorporated area is already paying quite a bit extra for CalFire’s services.

So why aren’t the governor and legislature going after the cities who permit high-density neighborhoods in the real urban-wildland interface – and the property owners who buy into them? I think it’s because rural folks are meaningless in the context of re-election. You can safely decimate their towns and property values with destructive industrialization like wind turbines, just as you can balance the budget on their backs. They don’t have the numbers to defend themselves at the polls.

Every one of you, whether urban or rural, needs to pray that this fee goes down in flames on constitutional challenge. If it doesn’t, we can kiss our Prop 13 protections goodbye. Constitutional acceptance of a fee based on such careless justification will open the floodgates of taxation on Californians in a way that nothing ever has before.

Urban residents should ask themselves, for instance, who benefits the most from the urban highways that CalTrans maintains? By the same skewed logic contained in this fee, anyone who lives anywhere near one receives a disproportionate benefit for which he ought to pay. How about California Highway Patrol? You have many more bars and drunk drivers per capita than we do (our bars went broke long ago). Doesn’t that count as a disproportionate benefit? How much should you be charged for that?

This is the slope down which we all slip if this fire fee is allowed to set a precedent for such cheap and easy use of the “disproportionate benefit” argument. Sooner or later, the legislature will realize that $150 per household from the urban populace is a lot more money than what they can get from us hicks. And they will be emboldened to go further because they simply cannot resist the siren song of the dollar.

Billie Jo Jannen is a property owner and resident of Campo for 21 years, has written and edited rural news for 22 years, and hosts the TGIF Report every Friday on Alpine’s 107.9 FM. Her children and grandchildren also live in Campo. Reach her via email at jannen@inbox.com.

Yup, she hit it right on the head of the nail. I would only add in recent years, once in the County and 3 times in the Campo area, attempts to pass a fire benefit fee to support the creation of a county fire department or to strengthen local fire departments failed to pass the super majority vote required. In Campo it would have amounted to giving up a six pack of beer per month. I think people are still a little upset that proposition 172 monies, advertised as money to go to police and fire protection never made it to fire protection as SAN DIEGO COUNTY DOES NOT HAVE A FIRE DEPARTMENT! In spite of the Board of Supervisors promotional videos throwing 15 Million dollars at a 200 Million dollar problem does not a County Fire Department make. Since the citizens of San Diego County have let the BOS get away with this for years I bet California will get away with the $150.00 annual fee. After all the citizens of this state have elected left wing, feel to be you and me, pin heads for decades and they just re-put the head pin head back in office as Governor.