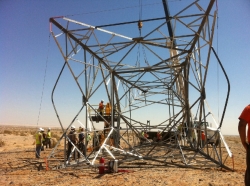 ACPG meeting Thursday includes Powerlink issues as well as proposals for a solar farm, a hotel, zoning changes, and a new park for Alpine

On September 19, Aspen, environmental consultant to the California Public Utilities Commission on the Sunrise Powerlink project, released a report on construction and compliance activites for the high-voltage power line.  The report reveals over 30 cases of non-compliance and serious incidents including fires, diesel spills, accidents, ignoring monitoring requirements, and heavy objects falling from helicopters--again.

Some of the incidents, such as two 16,000-pound towers dropped by the project’s sky crane helicopter, have previously been publicized. But many others come as news to both planners and the public.

These include several fires caused by construction activities, diesel fuel spills, a skid falling off a helicopter, a forklift toppling over, and a helicopter dropping an air compressor. Aspen also reveals deaths of several endangered or threatened species (though others were safely relocated), as well as unauthorized disturbance of sites without monitors present and failure to promptly report discovery of significant biological resources. (Scroll down for details) 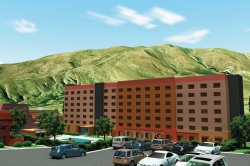 Other Hot Topics on Agenda

Other major items on the ACPG agenda for Thursday include a presentation by Viejas on a proposed hotel project, filling of a vacancy on the Alpine Design and Review Board, a proposed solar farm in Alpine, a County presentation on a proposed park by Albertson’s, and proposed zoning changes for Alpine Blvd.

But the topic most likely to evoke fireworks is an SDG&E proposal to expand hours of operation at a time when many merchants are seeing business dry up due to the two-year-long construction project amid an already weak economy.

The new report adds fuel to the firestorm of controversy surrounding the Sunrise Powerlink project. Serious incidents reported include:

FIRES
August 15, 2011: A 2-acre brush fire was ignited by sparks from a loose chain on a project vehicle.
August 5, 2011: A fire caused by excavation activities burned a 50 x 50 foot area.
May 5, 2011: Three small fires were reported on Link 4 underground; fire tools were used to respond and Alpine Fire was notified.

ACCIDENTS
July 11, 2011: A skid fell off the KMax Helicopter en route to a tower site; no injuries were reported.
August 4, 2011: An air compressor was dropped by a KMAX helicopter, spilling 50 to 60 gallons of diesel fuel in an area 75 feet in diameter
August 13, 2011: A project truck went off an embankment 300 feet on Lyons Valley Road. No injuries were reported.
August 18, 2011: An unsteady load caused a forklift to fall to its side, spilling a small amount of hydraulic fluid.
August 26, 2011: Approximately 32 ounces of diesel fuel were released near 2754 Alpine Blvd by a construction truck.

ACTS OF NON-COMPLIANCE
December 7, 2010: SDG&E failed to report unanticipated biological resources within 48 hours as required.
March 15, 2011: Staking crews were operating and were delivered by helicopters within the protected golden eagle buffer zone.
September 16, 2011: Construction activities were commenced before the arrival of biological monitors. 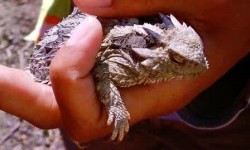 Other acts of noncompliance included unauthorized removal of a nest from a water truck , operating in unauthorized areas, and discharge of 1,000 gallons of potable water into Coyote Wash after a water tanker became stuck, and more. In addition, three flat-tailed horned lizards and a San Diego desesrt woodrat were found dead in apparent construction-related incidents.

It also indicates that SDG&E reported the fires and that no injuries were reported in the accidents listed.  View the complete report.

If SDG&E and Sunrise Powerlink crews weren't there no need for endangered species cautions would be needed! I'd like to know more about the: operating in unauthorized areas, and discharge of 1,000 gallons of potable water into Coyote Wash after a water tanker became stuck, and more.
December 7, 2010: SDG&E failed to report unanticipated biological resources within 48 hours as required.
Operating in unauthorized areas, isn't this trespassing. How were the property owners compensated and what damages were done? Why are they going off course? And how do we know the water was potable and was it part of the water stolen from fire hydrants without authorization as reported previously.
The Sunrise Powerlink crews have stripped the land from southeast county to the northwest corner of the county which you can witness via the Coaster and Amtrak trains. Huge swaths of land have been stripped clean of their vegetation while big poles and high power wire are struen all over the county making a disturbing eyesore over many many open spaces that were once pure and virgin style oasis's in areas where open space was(is) a great & needed blessing. And rather than paying for this land and it's use they use eminent domain and public policy to garner more profit for their stakeholders while defrauding the ratepayers.
PLEASE REMEMBER ALL THIS WHEN NEXT MONTH: OCTOBER 10-14TH, the CPUC (Ca Public Utilites Commission) comes to ask about RATE INCREASES for SDG&E, https://www.facebook.com/event.php?eid=281640331851663&ref=ts

The bias in this so-called reporting is really getting old!

A good place to start is the beginning: "...Report Reveals Dozens of Serious Incidents..."
By your count and mine I counted eight (8); I'll even give you the "32-OUNCE" diesel spill!
But, Dozens? Not even close.

Next up, the body count: 3 dead lizards, 1 dead rat (the only good rat is a...never mind); however, 12 lizards, 1 snake, and one skink RELOCATED. New subheadline: "SDG&E saves endangered species."

The suggestion that THIS report "adds fuel to the firestorm..." is utter hyperbole. I actually read the report. It confirms that this is a project on a grand scale. It seems to show they are mostly compliant with the myriad regulations imposed on the project. It also documents the few non-compliance and other problems associated with this immense project.

Just label your "reporting" editorial next time cause that is what it is.

The story is factual. There are over 30 incidents listed in the actual report. We only posted a portion of them in the story.

An Alpine planner promised "fireworks" at the meeting over this, and the term "firestorm" is appropriate given the number and vitriol of emails from backcountry readers on this issue.  I am aware of some complaints of alleged noncompliance that were not included as well, and also many where the CPUC ignored citizen's legitimate complaints and allowed all sorts of problems to go on.

Kmax Helicopters do not have skids so one could not fall off.

You should take that up with Aspen who authored the report if it's not accurate.

And they have the full support of the CPUC who seem at this point to be complicit with anything SDG$E does. Even when calling the FAA when helicopters were flying only 100'- 150' over my house with tethered loads, I was given the third degree by them, touting the rights of the contractor to fly their cursed helicopters. It wasn't until I pointed out to the safety officer to look at a google earth map of our area that he saw the helicopters had miles upon miles in which to fly, without flying directly over my OCCUPIED house.

In the first place, OSHA law, requires all structures to be vacated when helicopter rigging operations are taking place and FAA law forbids flying over homes with tethered loads altogether. As a former rigging instructor for the California State Pipe Trades, teaching for the State Apprenticeship Program under the San Diego Community College District, I am an expert on this matter and know, first-hand, that these sorties are illegal and could end up causing the deaths of innocent homeowners in our back-country.

As this report shows, SDG&E helicopters have dropped not just a couple loads, but more than a few. What if they had been over occupied structures?

And I am appalled that the CPUC, Cal-OSHA and the FAA appear to wink at the law in this regard.

We would like to run images from anyone with photographic evidence of these violations occurring. You are correct that it is absolutely a violation for SDG&E to fly a suspended load over homes.

Could you site the osha (Helicopter rigging operations) standard is this a FED-OSHA or Cal-OSHA I would like to read it.