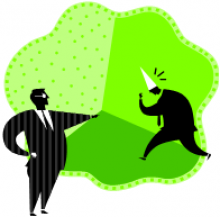 Mayor Art Madrid made a strong plea for the program, noting that it would “benefit both the merchants and global communities as well.” But council members Ruth Sterling, Mark Araposthathis and Ernest Ewin voted against the measure, arguing that it was not the city’s role to promote one business over another. East County Chamber of Commerce president Scott Alevy, in an appearance that shocked fair trade supporters, testified against the measure even though his full membership had not been consulted on the measure.

He voiced “concerns,” adding that “we believe the government should not be telling businesses what to sell, how to sell, or what to charge.”

The measure merely offers consumers information so they can choose whether to shop at fair trade stores or not. Merchants who feel disadvantaged can easily add just two fair trade products to be included on the list. But the mayor and others missed the broader point. The City, on its own website, already supports many initiatives that show preference to some businesses over others—and rightly so, to promote the public good.

I noticed that La Mesa’s Chamber of Commerce representatives were curiously absent. Could that be because the City actively promotes the Oktoberfest sponsored by the La Mesa Chamber? The event fattens the City’s sales tax coffers by bringing 200,000 visitors a year to La Mesa. Those sales ring up for merchants in the La Mesa downtown village and also for out-of-town street vendors. Doesn’t that lure shoppers away from Grossmont Center and other areas of the city?

The City website also promotes the “Live Well” initiative which “provides residents with information they can use to find their own ways to practice healthy living.” That can’t be good for doughnut store businesses. How about promoting city parks and recreation classes? I’m sure other local Zumba and Yoga instructors would love referrals to their stores, too.

Then there’s the City’s Sustain La Mesa Festival, which features booths from a variety of vendors, many of whom are not even from La Mesa. They offer organic foods, fruit trees, and more. A local auto dealer displayed an electric car. Should we give his competitors who don’t offer electric vehicles equal time? Of course not.

It is perfectly correct and justifiably for a City to promote policies for the public good. The City already has a strong sustainability platform. Ironically on its same agenda, the Council voted to apply for a national award for its sustainability practices. Its vote against Fair Trade stands as a blight on its otherwise glowing green record.

The Fair Trade La Mesa measure was designed to help assure that people in impoverished countries aren’t preyed upon by environmentally rapacious corporations in the name of profits. Coffee and banana plantations are among the worst at both environmental practices and wages that keep people in poverty. A speaker from Fair Trade San Diego who spoke at the Council meeting told of entire towns where mothers give birth to horribly deformed babies due to the chemicals they’ve been exposed to. He also spoke of towns that have escaped such horrors, thanks to the rise of markets for free trade products.

Where were the so-called pro-life members of the council last night? Why, casting their votes on behalf of companies represented by an out-of-town Chamber of Commerce instead of showing compassion for unborn babies, children and families.

Councilman Ewin seemed to recoil in horror at mention of the words “social justice,” asking repeatedly if non-fair trade stores might be picketed. Perhaps he was fearful of an “Occupy La Mesa” march to protest his council selling out to corporate interests instead of the very real needs of people suffering around the world.  (Perhaps this Council deserves that sort of negative attention for its mindless, heartless action.)

Speakers told of how Fair Trade has helped entire communities around the world. That’s why big cities like Chicago and Boston, as well as numerous small towns, have joined the Fair Trade movement—which just happens to also be one of the fastest growing retail trends in America today.

I’ll bet many of Alevy’s Chamber members would actually support a Fair Trade designation in their city. Oh, but wait – the majority of his members aren’t even from La Mesa! Could it be that Mr. Alevy was, in fact, worried that his members in El Cajon or elsewhere might actually LOSE business to consumers who would make a conscious effort to shop at fair trade retailers in La Mesa instead?

Fair Trade La Mesa supporters should reach out to all of the people in La Mesa---as well as people in the broader East County community who may want to make La Mesa a destination for their fair trade shopping. The group had planned to list La Mesa on brochures and websites promoting La Mesa—literature available nationally, even internationally.

The movement is supported by many churches as well as by community groups, such as La Mesa Sunrise Rotary Club, which spoke in favor of the resolution.  La Mesa stood to bring business to our community by becoming the first Fair Trade city in San Diego County.

Instead, much to our City’s shame, three La Mesa Council members cast cowardly votes and bowed to corporate interests, turning down an opportunity to merely give La Mesa residents information on how our buying choices can make a positive difference to impoverished people around the world.

La Mesa Council members Sterling, Ewin and Arapostathis were wise to be wary of these people. Looks like the Fair Trade folks get ugly when they don't get what they demand.

Does this special interest group also pull a gangster protection racket on little local businesses that don't carry their products? Like "Sell our stuff or we'll picket you and drive you out of business".

We already have one special interest group, Sidney Cicourel's anti-Puppy Store zealots, destroying San Diego County businesses who don't comply with their demands. We don't need another one.

The group's members repeatedly assured Councilmembers that they have no intention of picketing or protesting businesses that choose not to carry free trade products.   Your statement accusing them of a "gangster protection racket" seems pretty close to libel.

Likening them to a group that pickets pet stores carrying puppy mill pets is equally bizarre, since if anything it points up the need for consumers to have more information.  My kids made the misfortune of getting a dog from the pet store that was picketed in La Mesa years ago before its practices came to light.  Our family collected under California's puppy lemon law after learning the puppy had hip dysplasia and needed surgery. I wish the picketers had been there years ago so I would have known the store had a reputation of  buying puppies raised in inappropriate conditions and avoided it.

As a consumer, some people WANT information on things like stores that buy from puppy mills or merchants that choose to offer some fair trade products. It seems those who are upset want to censor information that may be helpful to people wishing to make informed buying choices.  By your logic, we shouldn't allow things like Consumer Reports to tell us what products are safe since it might take business away from those selling unsafe products.

That is a question, not an allegation. I do hope the Fair Trade folks do not consider it a a useful suggestion.

Thank you, Meg Jensen for your editorial! We were so disappointed and shocked with the City Council's vote against La Mesa's resolution to support Fair Trade. We have not encountered one person that was against this since we began our campaign in February 2011. Not one! We have spoken to almost all of the service and non-profit groups, sent letters and visited many of the stores in La Mesa and have spoken with at least 30 of the 41 churches in La Mesa. Many merchants carry at least one Fair Trade product. Most did not know what the label meant. Many did not know they even carried a Fair Trade product. After explaining the importance of what the Fair Trade certification means, the merchants supported our efforts and said they would explain the label to their employees. Most said they would look into carrying more Fair Trade products.

With our national website, we are directing people to look for Fair Trade products in their local stores and to also ask for them if they cannot find them. When customers shop in La Mesa, we encourage them to Buy Local and Buy Fair. It is all about awareness, about making a conscience decision when buying products that are not made or grown in the US.

Yes, buy that cup of coffee, but pick the one with the Fair Trade label. You are then assured that that farmer was paid a fair wage, he and his family were not exposed to pesticides, his children are in school, not used for child labor, and have health care. So as we sustain these people, we are sustaining La Mesa merchants by Buying Local and Buying Fair. Coffee, chocolate and tea are not grown in the US. Why not help these people lift themselves out of poverty with your purchase?

There are many colleges and universities that are committed to Fair Trade practices and education, including UCSD and USD. Even Burger King has Fair Trade Coffee at UCSD! Why can't La Mesa be the first Southern California City to become a Fair Trade Town? How great would that be!

are Chamber members they may wish to let their Chambers know their views.  I  wonder how many would approve/disapprove of a Chamber leader taking an anti-fair trade stance without consulting them.  Scott mentioned that he talked to a board or committee, not sure if it was his board of directors or legislative committee. How many of those who urged him to oppose this are actually business owners in La Mesa?

I'm curious what the La Mesa Chamber's position is on this, as well as the La Mesa Village Merchants Association. Have you met with them?

Please keep us posted if you decide to do a petition, as some were discussing last night after the meeting, so that we can keep our readers posted.

La Mesa Council members Ruth Sterling, Mark Arapostathis and Ernie Ewin voted in favor of the Constitutional principles of limited government and personal freedom. We all stand a little taller as a result.

It may have been a very difficult decision with passionate appeals on either side. The most important decisions are, by nature, the most difficult. The supporting principle here is that the Fair Trade proponents still have every freedom to market their ideals to the business community and consuming public on the merits of their message. And without the use of public resources, including the power of a public resolution, to persuade or discourage anyone, we all win.

That is truly Fair Trade!