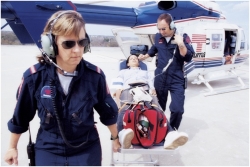 November 5, 2011(San Diego) – Councilmember Marti Emerald says San Diego needs to recover its costs for use of the City’s medical/rescue helicopters. So she is asking Congress for federal permission to allow the city to charge patients for costs of treatment and rescue services. Emerald says the move is needed to assure rescue helicopters are available when needed.

But for victims of accidents on remote roadways or hiking trails, as well as those suffering medical emergencies such as heart attack or snake bite, the costs could be staggering.

Flights run thousands of dollars—a cost that is generally not covered by most medical insurance policies, even for those with health insurance, ECM has learned.

A hiker rescued last year expressed shock to learn that cost recovery was being considered. "Aren't we already paying for these services with our taxes?" she asked.

Federal law prohibits patients cost recovery from patients nationwide.  If that changes, another concern could be injured or ill individuals deciding not to call for help for fear that they couldn't afford the costs of a helicopter rescue. That could lead to serious health complications or deaths.

But Emerald contends the alternative may be no services available at all.

“Every second counts in a medical emergency and our Fire Rescue helicopters save lives. But at $3,200 per hour in flight, the cost may ground these lifesaving tools unless we can start charging for the service,” says the Councilmember. “The Federal Aviation Administration says current federal rules don’t allow us to recover our costs. We need to change those rules.”

Councilmember Emerald has written to Senator Dianne Feinstein for help amending the regulations that currently prohibit cost recovery for medical/rescue helicopters nationwide. Emerald has also written to California members of the Congressional General Aviation Caucus to build support for this effort. Those Representatives include Brian Bilbray, Bob Filner and Duncan Hunter from the San Diego area.

If you wish to voice your vews on Emerald's proposal to charge patients for helicopter rescues, contact her at:

To contact Senator Feinstein and your Congresional representatives, visit our Citizens' Action Center at: http://www.eastcountymagazine.org/0809soundoff

Wonder how the citizens of the City of San Diego now feel about electing a "news reader" to run their government? Wanted, city council person. No experience required. Really?