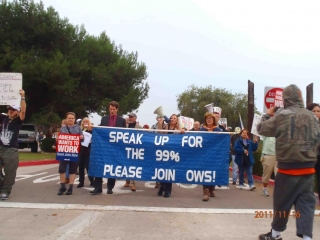 Occupy San Diego organized the protest to stress how much maintenance our infrastructure needs. The march started with a chant urging Congressman Brian Bilbray to “fix this bridge.” Occupiers called for infrastructure jobs to put Americans back to work and resolve safety issues with this bridge and others. View a video by Jerry Malamud. 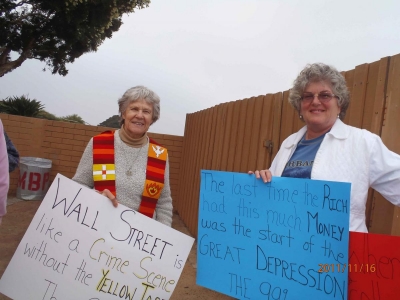 They met today for the first time at the Mission Bay Visitor Center. Mrs. Popeney said that she came because she “has lost 96% of my investments” and that “corporate greed rewards the CEO.” She was angry about the bail out which she called “immoral and unjust to society and working people.” She is a retired teacher and clergy member. Margaret Klingensmitch came answering a call from Move On; she is a member of the National Education Association and is angry about attacks on education.

The March took a more organized feel once Lorena Gonzales, secretary treasurer of the San Diego-Imperial Counties Laborr Council, instructed the marchers on how the occupation was to take place. She and the occupiers negotiated with San Diego Police on how to do this safely. Gonzales reminded everyone that if anything fell from the bridge, that was a felony. 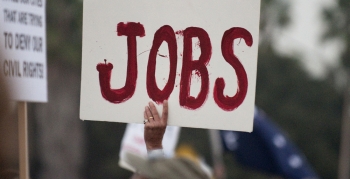 As marchers walked on to the bridge they lined on the northern side and displayed banners and American Flags, which was received well by the evening rush traffic, with many a sympathetic honk. On some news sites, however, a few commuters posted comments voicing frustration over delays.

While on the bridge I talked to Cindy, from Mission Valley, who did not want to give me her last name. I asked her what brought her out of the house, as she was still using a walker after a recent surgery. She told me “you need to get out of the house for a reason and this is a good cause.”

The mood changed as the main part of the rally started, with speakers. Gonzales made it clear that labor and the occupiers are in the same fight for the 99%, drawing applause. She also said that Labor was going to continue to support the occupation. She noted that ever since this started the national conversation has changed.

Ray Trujillo, a retired worker and long time labor activist told the crowd, “This was our day, this is our bridge, this is our labor council, this is the 99%.” He also reminded the crowd that veterans have stood in between the police and the occupiers, protecting the occupiers.

John Kenney, who is on the tenth day of a hunger strike to try to get the attention of the City Council to support the occupy movement, told the crowd that he loved this movement and was proud of them. Then Mr. Frank Luntz led the crowd in a chant thanking the police for doing a good job, adding, “We love you when you do your job.”

The legal team for Occupy San Diego took the bullhorn to announce that a lawsuit filed against the City is scheduled to be heard on Tuesday afternoon. This case alleges violation of free speech, as ECM previously reported (http://eastcountymagazine.org/node/7800) and revolves around San Diego Municipal Code section 54.0110. The legal expert also stated that this is the first time since the 1960s that so many lawyers are working pro bono. The case is being pursued by the National Lawyers Guild, and Canvas for a Cause, as well as former city attorney Mike Aguirre.

Marchers moved off the bridge peacefully and Occupy MIssion Bay held its first General Assembly on the East Side of the Mission Bay Visitor Center.

There were at least two hundred people, most of whom I caught on video at the march.

There is no denying that it was the working men and women, the elderly, and the poor who were the victims of Wall Street. Working men and women lost jobs and homes. The elderly lost savings and investments, and in many cases, homes. The poor, who were tricked into putting what money they had into homes they could never pay for, lost the home and the money. The FBI's investigation of mortgage fraud said 80% was caused by lenders, not borrowers. Pension funds that bought what they were told were AAA investments by Wall Street, found out the investments were trash and lost billions - SD County Retirement System was taken for $2 billion. Meanwhile the big banks, corporations and some rich individuals were made whole with taxpayer money and NOT ONE went to jail. Wall Street got bailed out, we got sold out. Only in Corporate-Controlled America. The 99% will fix that on election day.

It is clear that you have a pro OWS viewpoint, and you seem to be willing to lie or make things up in order to support your belief. I was at the bridge last night and there certainly were not "hundreds" of protesters. I think 35-40 people would be more accurate.

You get a lot of attention with your garbled rants at DU, but you really don't have the intelligence to make it in the real world, Nadin. It's easy to spot a serial liar online, and you are exhibit A.

I know of 3 photojournalists who are there besides Nadin. Estimates on crowd size ranged from 200 to 500.  Other news reports all pegged it at 200 or more that I saw.  Some of the photos I've seen clearly showed far more than 35 or 40 people. The OB (Ocean Beach) Rag has some photos of a large crowd at the bridge here:  http://obrag.org/?p=49834

It's possible you visited at a specific point in time when there were fewer people there, but during the course of the rally/march there were easily 200 and probably more.  Nadin has worked for Red Cross in disaster situations and has training in crowd-counting, FYI. Also, Hoag, I need to remind you of our forum rules.  Personal insults and name-calling are not allowed.  You may object to content of a story in a respectful way, but not by calling our writer a "serial liar" if you wish to post here in the future.

I was there too, and if you thought there were only 35-40 people there public education has failed you badly.

I was at Clairmont Bridge last night also. There were between 300-400 people there.. I'm glad you agree that it is easy to spot a serial liar on line, since you are that liar. I found the report accurate and not biased. Gone are the days when you can make things up and get away with it. I am the 99

There were several hundred on the bridge when I arrived around 4:30 pm. More people came after work (5-6 pm).

Here's how it looked early in the evening (before it grew): http://youtu.be/27nAY5A-dOo

I was at the bridge last night and counted more than 300 protestors onsite. The math and counting skills of Hoag are clearly in need of assistance. Seems like this follower and comment have anger in the heart and soul, so he/she uses a forum like this to express his/her anger toward humanity. It was a peaceful protest (NO ARRESTS WERE MADE, no citations were written) that raised attention to a lack of job creation in American to fix our roads and bridges in desperate need of repair, which the American Jobs Act will provide - both jobs and fixing our roads and bridges. If Hoag used the same vigor to call on elected officials like Brian Bilbray to stop obstructing job creation in America, then we would all be much better off.