After public outcry—and criticisms by two of her opponents in the Mayoral race-- District Attorney Bonnie Dumanis declined to prosecute the felony charge. She referred the case back to the San Diego District Attorney for possible enforcement as a misdemeanor.

The case raises troubling issues of free speech in a country where according to the California Supreme Court, “the heckling and harassment of public officials and other speakers while making public speeches is as old as American and British politics; here, as in Great Britain, such protestant conduct has been thought to be outside the realm of legal regulation except in the most egregious cases.”

So the court held in the case of  In re Kay,” a 1970 case in which a Congressman was interrupted by protesters for about 10 to 15 minutes. (Read the full decision here: http://law.justia.com/cases/california/cal3d/1/930.html )

The high court ruled that since the member of Congress was ultimately able to finish his speech, “the state failed to meet its burden of establishing a substantial impairment of the conduct of the meeting.”

At the Mayor’s State of the City speech,  protesters chanted a protest in unison for only 16 seconds before they were removed by police.  (View videos:  video of this action ; a video of the actual Mic Check ).  Thus the outburst would appear to be clearly protected as free speech, based on the California high court ruling. The charges against the San Diego protesters, all members of Occupy San Diego, were filed under the same statute (Penal Code 403) as in the 1970 case.

Moreover, PC 403 explicitly states that a person who willfully disturbs a lawful meeting is guilty only of a misdemeanor, not a felony.  The California high court, in its ruling, found that the section did not apply in the case of the heckled Congressman, and refused to uphold even a misdemeanor charge.

“It is clear that 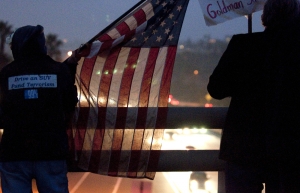 the Mayor and the San Diego Police Department overstepped their bounds,” former political consultant Benjamin Katz stated in a blog post citing the case law above.

Another troubling aspect of the case is that while anyone arrested has the right to file a complaint with the San Diego Police Citizens Review Board, the Board’s 23 members are appointed by Mayor Sanders, a former San Diego Police Chief.  Thus a potential conflict of interest question arises.  Can review board members render an impartial decision about a case involving the official who appointed them to their positions?

Ray Lutz, founder of Citizen Oversight Panels, a watchdog group, is also an activist involved in the Occupy movement.  He has suggested that the charges may be intended to “intimidate others from participating” in much the same fadshion as a SLAPP suit (a lawsuit filed to intimidate or silence critics).

“I think that charging anyone for standing up for free speech or interrupting a political meeting is unconstitutional,” Garcia told ECM.

That said, he acknowledged that the city and police “have every right to remove somebody who is being unruly or preventing a meeting from going on.”  But he objects to charges being filed—either misdemeanor or felony.

Felonies are typically defined as serious crimes including murder, rape, arson, and armed robbery—crimes where serious harm is done or threatened.  Felony convictions carry substantial jail time and a person convicted of a felony loses their right to vote.

“There are many examples of people interrupted at a meeting without being arrested,” he says.  A Republican Congressman interrupted a prior State of the Union speech by Barack Obama, shouting “You lied”, Garcia recalled.  In addition, some Congressional town hall meetings last summer were disrupted by Tea Party protests.  In San Diego, liberal advocates of healthcare for all have staged skits at Congressional town halls.  No arrests were made at any of those incidents.

ECM has previously profiled Garcia, a former mortgage broker who joined the Occupy movement. (read After our first interview, Garcia was arrested on a misdemeanor charge for setting down a folding chair at the Civic Center Plaza.  ECM published a follow up story on the potential chilling effect of police crackdowns on free speech.  (View prior ECM stories: http://eastcountymagazine.org/node/8286 and http://eastcountymagazine.org/node/8370.) 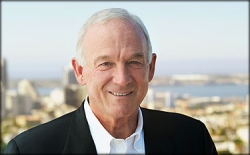 Subsequently, Garcia and his fellow protesters were arrested at the Mayor’s speech January 11 on a felony conspiracy charge—a charge normally reserved for the most serious of offenses.

What was the message the protesters were trying to deliver during their mic-check at the Mayor’s speech?  Ironically, Garcia notes, “My message was to stop using the encroachment law to arrest peaceful protesters. The encroachment law was never intended for that use…It was intended to stop people from erecting basketball hoops or dumpsters on public property. It was never intended to stop someone from putting down a chair and handing out flyers.”

Police have reportedly indicated the conspiracy charged was brought because the protesters conspired to present the same chant during the Mayor’s speech.  Despite his problems with law enforcement, however, Garcia expressed empathy for police.  “Police are just following orders.  They are part of the 99 percent.  We need to talk to the people who are issuing orders.”

As for Garcia, he has not allowed the legal hassles to slow his fervor for political reform.  With charges reduced to at most a misdemeanor, he headed to Washington D.C. to participate in a national Occupy protest and meet with members of Congress.  Along the way, however, he and a dozen other Occupy members drew national media attention when they were ordered off a Greyhound bus in Texas.  Greyhound subsequently fired the driver and arranged special transportation to get the protesters to their destination, albeit delayed by a half day.

“We were not protesting. We were not chanting. We had no interaction with that driver,” Garcia said of the bus incident.  He and others present have stated that the driver noticed T-shirts worn by the group while they were changing buses in Amarillo.  “The first thing out of the driver’s mouth was `DC doesn’t want you, either,’” Garcia recalled.  “Then he proceeds to tell us about his ultimate authority as a bus driver given to him by the Patriot Act to kick anyone off the bus at any time, even in the middle of nowhere.”

He voiced sympathy for the driver, however, as one of the 99 percent.  “I feel bad when anyone loses a job in this economy,” said Garcia, who added that he would have preferred to see the driver receive training.  “Political speech on a T-shirt or button is no reason to throw someone off a bus.”

He is planning on participating in a national Occupy on the Fourth of July in Philadelphia, birthplace of the Constitution and the U.S. Bill of Rights.

“It will be a sight to see,” Garcia predicts.

Sanders has been feeding at the public trough for far too long, it's time to either get a real job or retire; the public has had quite enough of you and your tactics. Public office is not your birthright and the people you treat with such disdain are the ones who have been paying your inflated salary for most of your life.