Update February 3, 2012:  Sgt. Polk's death has still not been reported by the Dept. of Defense, nor has any notice of his death appeared in his family's hometown newspaper. A source has further informed ECM that his name has not been provided for addition to a memorial that honors fallen special services soldiers. Thus at this point, it appears likely that Polk did not die in service overseas. Perhaps he faked his death, or possibly someone else posted misleading information on his Facebook account. Where is he now? If anyone has conclusive evidence, please email editor@eastcountymagazine.org. 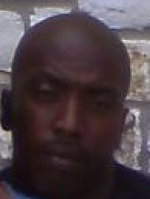 January 12, 2012 (San Diego)—U.S. Army Master Sergeant Jay Polk has reportedly been killed overseas while on active duty with U.S. special forces, according to friends and family in San Diego, where he had been living recently.

During a candlelight memorial service held this evening at the Civic Center Plaza, one mourner observed, “Jay was a Cavalryman, he was a Master Sergeant, and he knew how to take care of people.”  The service was attended by local veterans, occupy members, and friends of the fallen soldier.

Word of Polk’s death came as a shock to local members of Occupy San Diego, where Polk was known as “Chef” from the early days, helping to prepare and serve 500 to 1,000 meals a day for 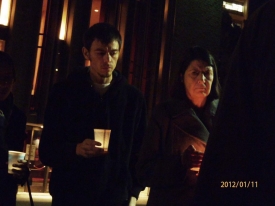 homeless people and Occupy members—anyone who needed a meal.

In his final post before deploying, he wrote to fellow members on the Occupy San Diego Facebook page that "you guys are this country's heroes and sheroes."

The U.S. Department of Defense has not yet published news of Polk’s death, however such confirmation is commonly delayed in special forces operations. The family has told friends locally, however, that they are awaiting delivery of his body in Virginia and he is expected to be laid to rest next week at his hometown in New Iberia Louisiana.  Raised in Mississippi, Polk leaves behind a family including young children in Louisiana.

In the Army, he first served with a Cavalry unit out of Fort Campbell Kentucky and later, with the United States Special Operations Command, according to friends and his own Facebook page, which has since been removed from the Internet. In January, he informed friends that he was being deployed again overseas. The location and cause of his death while on active duty have not yet been made public.

Chaplain Ron, who has ministered to the Occupy members, grew up in Barksdale, Mississippi town as Polk where the families knew each other. Polk left that town when he joined the Army.  “Twelve days ago, he asked me to pray for him and said that he was worried,” he recalled.  Polk had just learned of his deployment, but said that “he could not divulge anything, since it was really secretive.”  Polk said his goodbyes to friends in San Diego just days before news came of his demise. 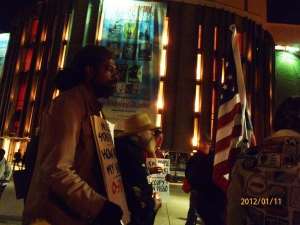 At today’s memorial service, a Veterans for Peace member read the poem, Fidler’s Green, to honor Polk’s service in the Cavalry.  http://lewis184.home.mchsi.com/poem_fiddlers_green.htm .  He also read the Special Forces Prayer, in honor of Polk’s active duty service with the U.S. Special Operations Command. http://www.professionalsoldiers.com/prayer.php.

His friends spoke highly of  Master Sergeant Polk. To Kayla Ward, he was “like a brother. Jay was like family. I was very close to him, his partner, Julie and his children.”

According to Janessa Jones, “Jay sacrificed his time and money to help others. I got to know him and was devastated when I found out. He deserves so much more than this, love and light and healing energy  to their family. Their pain is just beginning.”  Jones also played music in his honor.

Military veterans present formed an honor detail to salute the colors brought by a member of the Patriot Guard, then released Master Sergeant Jay Polk from his duty and saluted the flag.

A Veterans for Peace member concluded that his fellow Cavalryman, Master Sergeant Jay Polk, was “a man of honor.”

On Sept. 20, 2014 we received an email with the following information. The sender asked not to have his emil listed but the links check out and appear to show what happened to Polk/Jamond after he left SD: The person pictured and posing as Sgt. jay Polk is actually Jamond(sometimes spelled Jomond) Polk born 4-1-1975 and is from New Iberia, La. I can assure you he is alive and well and is a criminal. He was in New Iberia as recent as August 2014 until he went on the run from some local warrants. He spent time in Iberia Parish Jail from November 2013 until December 2013 after being arrested on several outstanding warrants to include Forgery, issuing worthless checks, and other charges. He is currently wanted in Lafayette Parish for warrants. He is also wanted in Florida and Texas for outstanding warrants. I could go on but I'm sure this is all the information needed to put this issue to rest, if it is still of interest to you. I am providing a link to his arrest in Florida to prove he could not have died prior to 2012. His criminal history probably could be obtained from the Iberia Parish Clerk of Court Office. Also is a link to a lawsuit he filed against Caddo Parish Sheriff claiming mistreatment in prison, and other links to his history. Just in case anyone is not familiar with "Parish", it is what Louisiana uses instead of "County". http://openpasts.com/PublicRecord/JAMOND-POLK/15370134372810 http://law.justia.com/cases/federal/district-courts/louisiana/lawdce/5:2009cv01671/112631/9 http://theadvocate.com/news/police/7847366-123/acadiana-police-and-fire-briefs http://www.utahsright.com/chargesprofile.php?id=17385758

He never was a MSGT. See here for a copy of his service record obtained via FOIA request: http://thisainthell.us/blog/?p=28611

I don't know where Jay Polk is, but I do know he's not a Master Sergeant in the Army, and he never was. He was kicked out the military after less than one month of service in 1993. His military record can be seen here:

It's funny that everyone seems to think that he was a Master Sergeant. Obviously Jay must have told them this. But then on his own Facebook page, he refers to himself as a First Sergeant:

They're two completely different ranks, and it's impossible for a single soldier to ever be both. Jay couldn't even keep his own story straight.

If I were y'all, I'd be a bit more careful about the "veterans" that you accept into your activist clique, and then venerate for their service. You might end up looking foolish by holding a memorial service for a lying poser.

There is still no listing of a Master Sergeant Polk as a casualty (see link below for a list of all deaths in OEF/OIF through 1 February 2012).

Nor is there any story or obit in "his hometown of New Iberia Louisiana" regarding his death (or life for that matter).

I think you're sitting on a story of a fake serviceman faking his own death. Now that's a story!

I'm looking forward to your followup story as it develops.

We would never "sit on" a story if we had proof, but we also can't speculate without evidence.  What we now know is that several weeks have gone by with no report of his death confirmed by any official source. Every source we've talked with who has been in special forces or has familiarity with military procedures has confirmed that the death should have been confirmed by now.  Even a soldier who dies on a secret mission is typically listed as dead within a few days of the fatality, with location withheld if disclosure could jeopardize the safety of others.

We would like to speak with anyone who has information on Jay Polk, including anyone who can confirm whether his claims of military service are accurate or not (people claiming to be family/friends had confirmed this before, but may have been duped or part of a scam).  Also anyone who may have insights into what may have made him wish to leave San Diego or disappear entirely.  Of course if anyone can prove that he actually died, either overseas or elsehwere, we would like to know the circumstances.

Right now the evidence makes it appear likely that there was fakery involved, but we don't know what the motive may have been or whether others were knowingly involved.

Common reasons why a person might disappear and fake a death include financial gain (stealing money, collecting insurance), running from authorities, gambling debts, or running off on a romantic liason.  We don't know Polk's circumstances.

If anyone who knew Polk has information on his current whereabouts or insights into the specifics of why he might have disappeared, or where he might have gone, please contact editor@eastcountymagazine.org.