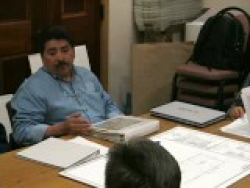 Mr. Halcon’s representative has asked for a response giving equal space to their concerns. While our story is accurate, in the interest of full transparency a statement will be added to our original story indicating that Halcon has disputed several points, along with a link to this story outlining their concerns and our in-depth response.

Halcon's representative objected to four statements in our article.

First, Halcon takes issue with this statement:  “In May 2011 Covert Canyon LLC was fined for conducting a business on the property without necessary permits. The activities at that time included firing semiautomatic weapons and more.”

County records prove it is TRUE that the County levied fines against Covert Canyon in a civil penalty notice dated May 13, 2011, with penalties “in the amount of $1,000 per day” for “the operation of a paramilitary type training facility” on the property.  Covert later reached a stipulated enforcement agreement with the County that bargained that fine down to a $500 “administrative fee.”  Moreover, a video aired on News 8  on the same date, May 13, 2011 showed machine gun firing at the site.

This is not the first time that Covert  has paid financial penalties levied by the County for illegal operations at the site.  According to Gig Conaughton with the County of San Diego, “Mr. Halcon was issued a $100 administrative citation on Dec. 18, 2007 for operating a military-styled training facility.” (It is unclear why the County levied this sum for activities that according to the County records, included operating explosives and combat training without a permit, when fines for minor offenses such as failing to cut weeds are typically far higher.)

Second, Halcon and his lawyer object to our statement that “The major use permit has never been obtained, yet paramilitary activities continue.”

This is a true statement.  Covert Canyon applied for a major use permit in 2007 and in 2010, Department of Planning and Land Use staff recommended to the Planning Commission that the project application be denied based on fire safety and emergency access issues.  Conaughton, in an e-mail to ECM in response to questions for our original story, stated that Covert Canyon had a “pending application for a Major Use Permit” to conduct military and law enforcement training on the property.  By numerous records, they had begun conducting military and law enforcement training before ever even seeking a Major Use Permit.  The DPLU recommendation in 2010 was “based on fire safety and emergency access issues,” wrote Conaughton, adding, “The Planning Commission recommended that Mr. Halcon continue to work with fire officials to try and address concerns. Mr. Halcon is continuing to do that, but has not made any further progress on his MUP.” [Note: Conaughton clairied on April 4, 2012 that the Commission directed its staff to continue working with Mr. Halcon.  The Planning Commission has neither approved nor denied the project, he clarified.]

Moreover, our article CLEARLY stated that Conaughton further clarified that in 2009, “The County amended its Zoning Ordinance to include medical training under the ordinance’s “Major Impact Utility” provisions.”  Further, he noted that today, an MUP would be required for such training.  However, he added “Mr. Halcon is being allowed to continue the [medical] training as a continuing non-conforming use because he started providing the training before the Zoning Ordinance was changed.”

As for use of the term “paramilitary”,  to which Halcon objected, various dictionaries define this term differently and some include military and law enforcement training, which is done on the site currently. The County has used the term “paramilitary” in its documents to describe the activities prior to the stipulated agreement, which conceded that county zoning doesn’t define the term.

Local fire officials, Alpine planning board members, community members and others have all used the term paramilitary to describe activities at the site.  A local fire chief we asked after receiving this letter further stated that he would consider shooting and wounding pigs for military medical training to fit his definition of paramilitary.  Groups as diverse as private militias and the American Revolutionaries can also be termed paramilitary.

In the past activities at the site have included even broader military-type activities.  In 2007,  the County issued  a cease and desist order demanding that Marc Halcon, Covert Canyon LLC shut down illegal activities that the County said included “shooting, shooting ranges, target practice, firearms training, combat training, military techniques, law enforcement techniques, use of explosives, helicopters landings,” and more.

Supervisor Jacob described seeing a video and website that “clearly demonstrated illegal activities on the property” according to an Alpine Sun article in May 2007, adding that she requested the cease and desist order be issued.

For sake of clarity, we shall in future be more specific and refer to “military and law enforcement” training at the site to avoid confusion with other alternative definitions.

Third, Halcon objected to a statement that “At various times, Halcon has claimed the site was used only for recreational shooting, then later admitted to training Sheriff and SWAT teams for law enforcement and now, military groups.”

Back in January 2008, the San Diego Union-Tribune reported on shooting AFTER the military-type training camp had been shut down: http://www.copswiki.org/Common/M416. The story makes clear that he was trying to claim only recreational shooting was going on because he wasn’t charging money. However, the County stated, “Halcon, who owns American Shooting Center in Kearny Mesa, said he is allowed to bring people on his property to shoot, but cannot charge them or operate a business without a permit. He said he’s frustrated county officials are saying he cannot help friends such as Custer because they work for the Department of Homeland Security.”

Halcon’s representative has made clear that no hunting is done at the facility.  We never said that it is.  Recreational shooting can include target practice or other activities that are well-documented on the site, and other sources have documented through the years.

Fourth, Halcon protested our inquiry asking why Halcon has been “allowed to continue paramilitary and other live-fire operations in fire-prone East County while operating in defiance of county law and fire codes?” Halcon’s representative demanded that we state this information is incorrect and suggested that Mr. Halcon is operating within zoning and fire codes.  No fire official, however, can confirm the latter.  As for zoning codes, since our story ran the County has found no violation occurred with the pig shootings, a fact which had not yet been established when our story ran and the investigation was ongoing.

As noted above, Covert Canyon was denied a Major Use Permit based largely on fire concerns by County Planning Commissioners.  George Barnett on the Alpine Community Planning Group also voiced concern in our story.

Barnett explains, “I voted `no’ as I could not endorse a project that the applicable fire district would not approve on the basis that the project did not meet the County’s fire ordinances and codes that had been revised following the aftermath of the major County-wide wildfires since and including the 2003 Cedar Fire.” Halcon’s appeal to the County Fire Board was turned down and a Cleveland National Forest ranger told Barnett that CNF would not endorse the project without fire codes being met; the property lies within the Cleveland National Forest, Barnett said.

After receiving the letter from Halcon’s lawyer, ECM called Dave Nissan, Chief of the Rural Fire Protection District with jurisdiction over the site, to ask if Halcon is now in compliance with fire codes.  He replied,  “They [Covert Canyon] may think that they are in compliance, but I cannot confirm right now if they are in compliance with all fire codes and standards.” Moreover, he said, “We are working with them on a major use permit and we are reviewing a fire protection plan.”

Chief Nissan further acknowledged the Fire District has major concerns about fire safety at the property. “Access is the biggie,” he noted.  Chief Nissan added that he is unaware whether the facility even has water storage or any fire suppression plan should live fire result in a fire starting.  Then he warned, “People are responsible for what happens on their land. So if they are a contributing factor to an escaped fire or starting a fire due to shooting, they would be responsible for those costs.”

Halcon’s representative further contended that our statements listed above were “false” and “suggest that Mr. Halcon is intentionally violating the law, and harm him in his reputation and business.”

We did not use the word "intentionally." Readers may draw their own conclusions on whether or not Mr. Halcon knowingly violated the law.

The facts are that Halcon’s site has a long history of violations and enforcement crackdowns for actions found unlawful by the County. At one point this included running a facility offering what the County described as “combat” training at a time when Blackwater’s effort to obtain County permission to open a military-type training camp in nearby Potrero was headline news countywide.

It was public knowledge at that time that such facilities required permitting.  Further, Raymond Lutz, founder of Citizens Oversight Panels, has indicated in 2007 that “I asked Halcon if Blackwater had approached him regarding Covert Canyon, and he said they had.” http://www.copswiki.org/Common/CovertCanyon  (Blackwater later reportedly denied approaching Halcon about the site,Lutz added.) Mr. Halcon has also discussed Blackwater issues in a videotaped meeting of the Alpine Community Planning Group in December 2007, declaring "We are not Blackwater; we did have a subcontract with them." http://video.google.com/videoplay?docid=8852939184401405775.

ECM prides itself on factual and objective reporting and took the comments by Mr. Halcon's representative seriously. Our story was balanced and accurate, including positive comments from some residents who supported the military medical training tractics at Covert Canyon, as well as comments from others who voiced concerns over the activities or the location.

Moreover, ECM made repeated efforts to obtain an interview with Mr. Halcon prior to running our story, and he would not return our email or phone message despite the fact that we made clear the topic.  Any of the points raised could have been clarified or discussed if he had chosen to provide his side of the story.  Moreover, to this day he has never responded to questions we’ve raised about YouTube videos such as this one, which purports to show special operations in covert military training at Covert Canyon:  http://www.youtube.com/watch?v=qS1E6tWTHD8  The video was posted  in November 2011. If this is occurring at the site it would most clearly fit anyone’s definition of “paramilitary” training.

ECM is not the first to run a story on Halcon or Covert Canyon’s activities. so Halcon's contention that his reputation was tarnished by our reporting is not credible. Numerous news stories about the Covert Canyon facility, including many with critical viewpoints of Mr. Halcon and the activities at Covert Canyon, had run in numerous major publications and on multiple TV news stories prior to our report. These include:

Residents react to use of pigs in military training in Alpine (East County Magazine March 5, 2012)

County cracks down on Covert Canyon operations (May 2007 – Alpine Sun)

With the above-stated clarifications, and after a thorough investigation, including a review of prior news reports from multiple sources, and fact checking with community members, planners and fire officials who have raised valid concerns about activities on Mr. Halcon’s property, ECM stands by its story.

Also, SDRF, the Fire Agency with jurisdiction, is in the final stages of approving the Fire Plan for Covert Canyon.

If I'm missing it please show us exactly where you're seeing that. I interviewed the SDRF chief and his comments are quoted in our rebuttal story above; he said nothing about any "final stages" of approval.