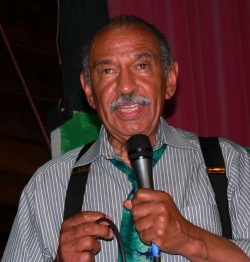 July 15, 2009 (San Diego) – "We are on the right track--and we are not going to be turned back," Congressman John Conyers (D-MI) told health care reform advocates, doctors and members of community organizing groups in San Diego on Sunday.  A leader in the Civil Rights movement who drew inspiration from his father, a labor leader, Conyers is considered the father of the single-payer healthcare movement in America.  He likens this battle to the Revolutionary War and the abolitionist movement to end slavery--efforts many believed were hopeless at first.

Conyers is the author of H.R. 676, the National Health Insurance Act. His bill would create a single-payer healthcare system to cover every man, woman and child in America. But Congressional leaders have refused to grant H.R. 676 a hearing--even though it is supported by 84 coauthors, more doctors than any other health reform bill, over 500 unions, plus "hundreds of cities, thousands of organizations, and millions of people,” said Conyers.   He revealed that since arriving in San Diego, he has decided to lobby President Obama personally on the need for single-payer healthcare—and he invited influential San Diego doctors to go with him.

Conyers criticized President Barack Obama for backing off an earlier pledge to support single-payer. Instead, the President is now supporting a “public option” measure which passed committee this week and will soon go to the full House. Conyers said the problem can be summed up in a single word: lobbyists. Specifically, lobbyists for the healthcare industry representing insurers, hospitals and phamaceutical companies.

“People are sick and they can’t go to a doctor. That’s shameful…Politicians have to be pushed,” said Conyers, chair of the House Judiciary Committee. He is traveling the country urging citizens to lobby their Congressional representatives and senators to assure that any healthcare plan approve should fulfill three goals: coverage for everyone, no financial barriers to healthcare, and no discrimination in healthcare delivery, the Congressman told a crowd of over 100 people at the WorldBeat Cultural Center in Balboa Park on Sunday. The event was sponsored by San Diego Single Payer Healthcare Coalition

Conyers said his bill, if enacted, would save money on healthcare by taking overhead costs of the current private healthcare system (“millions being paid to people who aren’t even doctors”) and applying that money toward actual healthcare delivery instead.

HR 676 would allow patients to choose their own physicians, provide full medical coverage for everyone, and give patients freedom to choose alternatives to conventional care, such as acupuncture or chiropractic care. No one could be denied coverage due to preexisting conditions.

He urged supporters to visit their federal legislators’ officers and not to settle for speaking with an aide. “This is a matter of life and death,” he observed. “Sometimes it only takes one person talking to a member to change their minds, if it is someone they respect,” Conyers noted, but added,”Then the other extreme is to go in 150 strong and say `We’re not leaving without an honest democratic discussion about 676,” he added. 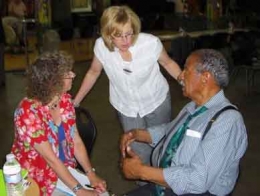 “This is hardball,” assured Conyers, then urged people to follow the example of Progressive Democrats of America (PDA)—an organization that has been active in community organizing on behalf of single-payer healthcare and other issues. “We need more activists,” he said, “not only for HR 676, but to make sure that we are watching everything our government does in this so-called democracy.” Conyers received a standing ovation--and a healthcare leadership award from Metro San Diego PDA.

Joel Segal, chief of staff for Conyers, believes the 44-year veteran of Congress will prevail, just as he has in the past on key social reform causes. “Why was the Civil Rights movement so successful? Because John Conyers was an architect of it,” Segal concluded. “Behold greatness. You are in the presence of a legendary man.”

Whether or not H.R. 676 is feasible to pass in this session of the U.S. Congress, or not, it is still important to champion it, as Rep. Conyers continues to do. I believe that it is our most powerful way of getting anything like a true public option in this years bill, at all. If our lobbying and protests for single payer are to be effective, though, Rep. Conyers spoke, in a meeting in the office of Bishop George McKinney, about an important need that must be met. That is, to unite disparate groups amongst us into a new coalition, e.g., one that would include the white liberal activists north of 8, the medical and other professionals, and the interfaith leaders and groups that are all potential supporters of the type of social justice issue that single payer insurance, truly, represents. By building such a powerful coalition and going together with doctors, clergy, and uninsured people to the offices of our Congress Members, they will find it a lot harder to turn us down, than when we appeal to them, separately. I believe Rep. Conyers is right and will work with others in this area, and elsewhere, to develop a much stronger coalition in support of issues like single payer than we, presently, have. The Ad Hoc meeting of 150 people that was held to celebrate the single payer work of the Honorable John Conyers, Jr., as well as to help network diverse local leaders and groups, at the WorldBeat Center on Sunday, 7/12/09, was a good start in this direction. Now we must build on that effort to effect a coalition that is truly representative of all of the progressive groups in our area. That is the task ahead.

Congressman Murtha has added his support to this measure.