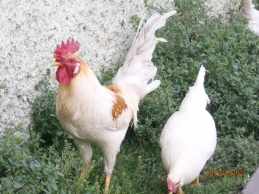 May 12, 2012 (La Mesa) – A plucky group of La Mesa residents turned out at last week’s Council hearing to ask that smaller property owners be granted the right to raise chickens and savor fresh eggs.

Councilwoman Ruth Sterling asked to add consideration of chicken ownership to this Tuesday’s agenda for a discussion by Council.

Currently, chickens are illegal on lots under one-third of an acre.  But a growing number of cities across the country are changing ordinances to allow backyard ownership of chickens (but not roosters).

El Cajon, however, rejected a proposal to consider chicken ownership after the mayor cited concerns over Newcastle disease.

Among the long-time advocates for legalizing chicken ownership in La Mesa is Patrick Dean, a chef and La Mesa resident who has declared his intention to run for the City Council.

(Leave it to Art to make a such birdbrain comment.)

Craig, Art didn't make that comment. It was made by the Mayor of El Cajon, Mark Lewis.

Mayor Lewis is in the waste management business and remembers a major Newcastle Disease outbreak some years ago.

I researched this and was surprised to learn that in fact that outbreak started with a backyard chicken.

That said, the research also indicated that overall backyard chickens are far more apt to be healthy and disease free.  There are certainly many, many cities that allow backyard chickens and have never had a case of Newscastle disease.

We don't outlaw owning parrots or other pet birds that can carry the disease.

Moreover there is now a vaccine for Newcastle's, which I would think would solve the problem.