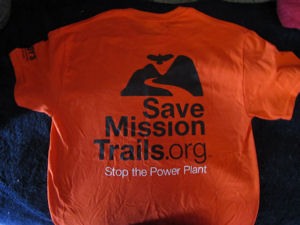 By David Secor, Candidate, 50th Congressional District
June 19, 2012 (Santee) -- Oh, NO! Shakespeare? No, this isn’t Hamlet’s question, it’s ours.
Will the people, the businesses, and the local governments who all know it’s the right thing to do, stand up and take the actions necessary to stop the proposed Quail Brush power plant. (In what follows, I borrowed the italicized words from Bill.)
Each of us as citizens should consider the question – Whether ‘tis nobler in the mind to suffer the slings and arrows of outrageous corporations (SDG&E/Sempra/GoldmanSachs/Cogentrix, etc.), or to take Arms against a Sea of corporate abuses, and by opposing, end them.
. . . For who would bear the Whips and Scorns of  corporate “persons,” the Oppressor’s wrong, . . . the Law’s delay, the insolence of Office, but for the Fear which makes us rather bear those ills we have (SDG&E), than fly to others we know not of (A Clean Energy District in Santee).
Thus Conscience (thought) does make Cowards of us all, and the Native hue of Resolution is sicklied o’er with the pale cast of Thought.
And Enterprises of great pitch and moment (Stop Quail Brush) lose the name of Action.
It’s really not so great a stretch. Each of us, as citizens, parents, grandparents, protectors of our children’s future, each of us is being asked to stand up and take arms against yet another in an endless series of “in your face” energy and environmental insults hurled at us with impunity by SDG&E and friends.
These corporate “persons” and their unindicted co-conspirators in government fully expect the People to simply roll over. We must not remain silent, and invisible. Our silence means our surrender and our submission. As Frederick Douglass said, “Power concedes Nothing without a Demand. It never did, and it never will.”
To bring greater attention to the issue, SaveMissionTrails.org will lead a trek up Cowles Mountain on Saturday morning, June 16th, at 7:30 a.m.  Join us, if only as supporters, and invite your friends, too. Whether you are a Santee resident, live in the Cajon Valley area, or are simply a citizen fed up with corporate abuse of the People and the environment – do the right thing – join in. Numbers matter to us, and to the media that will spread the word.
These are turbulent times, with issues and events that demand our participation. Our children, and grandchildren, will either praise us for protecting their future, or curse us for, after called upon to protect them, remaining silent and invisible. So take action. Become a part of this group of citizens like you. This Saturday at 7:30 a.m. at Cowles Mountain.
Stop the Quail Brush Power Plant? I can’t. But WE CAN!

Why is this power plant being even considered?

Would we permit a dump to be built in the middle of Yosemite or Yellowstone? Of course not!

Why then are our politicians and power companies getting away with doing the equivalently egregious destruction--Sunrise Powerlink, Ocotillo and Tule wind farms, Quail Brush power plant (to name just a few!)--in and to our own backyard?