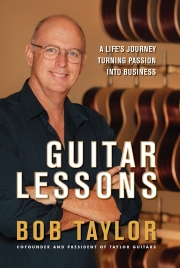 April 8, 2011 (El Cajon)--Bob Taylor, co-founder and president of Taylor Guitars in El Cajon, California, has added a new title to his repertoire: author. in Guitar Lessons: A Life’s Journey Turning Passion Into Business, Taylor masterfully crafts a story in which the guitar becomes a metaphor for much more—sharing secrets for success in business and in life. 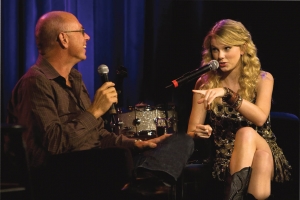 With his business partner, Kurt Listug, Taylor writes about the growth of a childhood dream into a world-famous company that now provides quality musical instruments to stars such as Prince, Taylor Swift, Jason Mraz, Zac Brown and many others. It’s a testament to the musical caliber of Taylor’s instruments that Taylor Swift captured entertainer of the year at the Academy of Country Music awards in Las Vegas and that the Zac Brown Band won “Vocal Event of the Year” at the same venue, both users of Taylor Guitars.

Considered a visionary among guitar builders, Taylor has pioneered advancements in both guitar design and process. He developed many of the innovations used across the industry in acoustic and electric guitar production today. Based in East County, his company employs over 500 people and builds nearly 500 guitars each day. The author describes this process in his book. 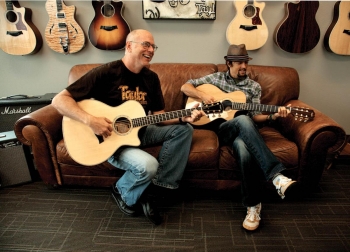 Clearly, Taylor has a passion for guitars and the playing of the musical instrument. In his book, he recalls buying his first guitar when he was in the fourth grade from Michael Broward. He further recalls at such a young age strumming his guitar to tunes such as “Wipe Out” or “Ghost Riders in the Sky,” or to his personal favorite, “Mrs. Brown You’ve Got a Lovely Daughter.”

Taylor’s cousin, Phil Jackson, renowned coach of the NBA World Champion LA Lakers, gives the foreword to Guitar Lessons. He notes that guitar making, like basketball, relies on mastering a repetition of skills to create a sense of accomplishment. “Reading how Bob found a way to hone the basic techniques of making a guitar down to the easiest possible denominator verified my admiration for his perseverance,” Jackson wrote. “There is a way to work and make it enjoyable, and yet dignified, for those who want to have excellence in their work. Bob Taylor has cut that Gordian Knot that makes his guitars things to be cherished.”

Guitar Lessons is a lesson of life, a rich tapestry and human interest story, told from the perspective of childhood dreams and the fulfillment of those dreams. It is more than just about guitars, or the manufacture of a musical instrument, crafting also a vision of greatness. 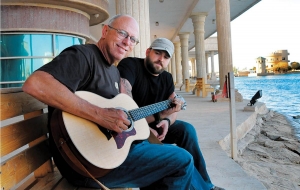 In his book, Taylor takes you through a life of perseverance. Perhaps most poignant is when Taylor states, “If the market had been great, and if corporate conglomerates hadn’t purchased and mismanaged Gibson and Guild during our fledgling years, perhaps the three of them would have squelched us; perhaps dealers would have seen no need to carry our guitars.” He states with pride that when his company began, Martin Guitars was a hundred times larger than Taylor Guitars, but as the 1980s progressed, Martin were only two or three times larger.

Beyond just business, the author describes in his book the pure enjoyment of his craft. He includes a photo of himself and Zac Brown in Iraq, spring of 2010, on a Zac Brown Band USO Tour. Taylor strums a guitar as Zac Brown watches and listens in admiration.

In his book, through anecdotes that blend self-deprecating wit with grassroots wisdom, Taylor reflects on the key experiences and personal revelations that nurtured the company’s growth. Guitar Lessons will give you a fresh perspective on how fundamental values of hard work and determination can be applied to overcome challenges in business and life, leading to success and personal fulfillment. Amid today’s mass-production culture, Taylor’s philosophy as a modern-day craftsman and respected leader serves as a compass for “crafting” a meaningful life.

As an avid guitar enthusiast myself, having once played the bass guitar with minimal success, I feel Taylor’s passion for the guitar. 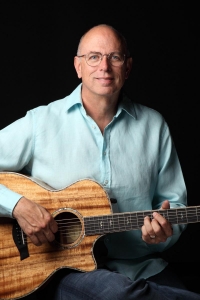 Many people try to take their passion and turn it into a business. Many others fail. Some sell out along the way. Taylor found his love as a teenager, worked hard at it, and created a profitable, growing enterprise, which he still happily stewards alongside Listug. If you’ve ever wondered how truly unique companies come to be, you’ll be inspired by Taylor’s Guitar Lessons. He gives a blueprint to success in your personal life, as well as your business life.

Taylor further stated: “Minet and Natalie are starting their own business life, and if this book helped only them it would be worth my effort, but I write it for everyone who finds themselves in the same boat as Kurt and I were in during those tough times, or at the crossroads that we came upon, like the day we decided to learn to become good employers. That was one of the many times when we decided to get in for more, rather than to get out for less. I write it in hope that our stories will help.” This, says it all about Guitar Lessons!

Guitar Lessons is a book that I would recommend to all guitar and music enthusiasts, as well as those seeking a blueprint to success and happiness in life.

Dennis Moore is a member of the San Diego Writers/Editors Guild, and has been a freelance contributor to the San Diego Union-Tribune Newspaper, LifeAfter50 Magazine in Pasadena, California, and the Baja Times Newspaper in Rosarito Beach, Mexico. Mr. Moore can be contacted at demoore21@sprint,blackberry.net.

Federal prosecutors on Monday announced a deal to drop a criminal case against Gibson Guitar after the instrument maker acknowledged its importations of exotic wood violated environmental laws.

Bob Taylor and Taylor Guitars of El Cajon was recently honored by U.S. Secretary of State John Kerry for protecting the environment with his Ebony Mills in the Cameroon.

Bob Taylor has been invited to attend the 7th Annual Diamond Literary Festival, which includes an Authors Dinner Cruise and book signings.

Who want to turn his passion into a business has definitely to learn about business first. As Taylor said it doesn't matter if you are in guitars, movies or anything else. If you are good in making movies or music this doesn't mean you are good in selling and marketing or handle any financial issues. Learn it first and get prepared for business life or you will feel it the hard way.