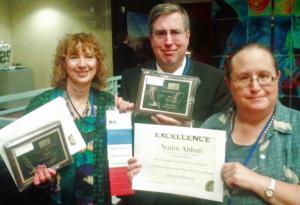 October 23, 2012 (San Diego’s East County) – Continuing our proud tradition, East County Magazine was once again among the top recipients of honors at tonight’s San Diego Press Club Excellence in Journalism Awards.  All entries were in the Daily Newspapers and Websites category, going up against the major print newspapers and online news sites in our region.

The majority of the honors recognized ECM's in-depth coverage of the impacts of major energy projects, including industrial wind turbines, on local rural, mountain and desert communities. ECM editor Miriam Raftery won nine awards, including a first place award in general news for Silence of the Lambs: U.S. Government authorizes killing of endangered bighorns in path of wind project.   Raftery and ECM intern Mia Myklebust shared an additional first place award in the public service/consumer advocacy category for Jacumba: A town surrounded. That story focused on the impacts of major energy projects on a small rural community.

Scroll down to see our full list of winners and read the winning entries.

Raftery’s entry titled  This was your land: East County suffers loss of our public properties picked up two awards, winning first place in the public service/consumer advocacy category as well as second place among all general interest website entries—a category open only to all first place winners across other categories.  The piece documented the cumulative impact of factors including wildfires, Sunrise Powerlink, proposed wind projects and more on our state and federal lands.

Photographer Tom Abbott won first place in the live or breaking news category for his winning image during the during the June Primary titled “DeMaio and Filner gear up for partisan fight.”

Nadin Abbott, a citizen journalist trained by ECM, picked up a second place in the health and medicine category for San Diego’s high suicide rates—and how to get help.

Raftery’s editorial titled Supervisors should deny Pattern Energy’s application for Ocotillo Express wind won third place in the essay/commentary/opinion category.  In addition, Raftery took third place in the Feature category with A Friday that was anything but black, describing a day of wine-tasting and fall foliage viewing along the back roads of East County.

Congratulations Miriam for all the good work that you do for East County Magazine, and bringing awareness to San Diego County and the world.