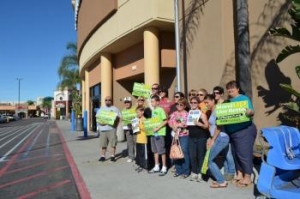 Some workers said they are afraid of losing their jobs—and those fears are not unfounded, since the company calls the protesters “outside agitators” and contends they only want to make trouble for Walmart.

Ashley Hardie, media spokesperson for Walmart, told ECM, “The reality is that there are only a handful of associates, at a handful of stores scattered across the country that are participating in these UFCW made for TV events.” 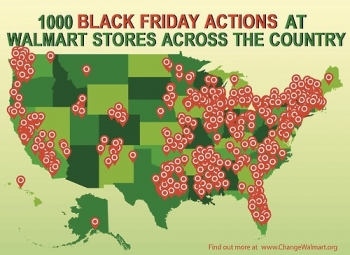 According to a map provided by event organizers, however, today’s protest sites included  over 1,000 Walmart stores—a very substantial “handful.”

Firing a worker for participating in union organizing violates federal law.  But fear of retaliation kept most employees away from the protest, though some privately told ECM they approve of the leafleting that protesters conducted to educate the public.

At least one Walmart employee did join the protest today at College Grove, said Anabel Salsdeo, a UCFW organizer.  She indicated that the employee “was very brave,  since the company has run an unrelenting campaign to keep people from participating.”

According to Jordan Weisman, writing for The Atlantic, Walmart is “a company that has done all it can to avoid unionization at all costs. It does not matter if they break labor laws in the process. .. The problem isn't simply what's legal -- the NLRB has found many instances where Wal-Mart's union busting behavior violated labor law. But the penalties are negligible. From 2000 to 2009, U.S. companies paid total of $36 million in fines for punishing workers over union activity. Wal-Mart alone could fork that over and write it off as the low, low price of doing business."

So what was the goal of these leafleting campaigns? Education. Those outside the stores wanted to share with shoppers a few facts that are part of Walmart culture. The company keeps hours for most workers below full-time to avoid providing benefits—so taxpayers pick up the bill. Employees with average yearly earnings of just $15,500 a year are instructed by their employer on how to apply to Medicaid, Cal-Fresh and other state services, since Walmart does not provide them with healthcare insurance.

Yes, we pay for that, as taxpayers. This is a form of “corporate welfare,” the California Progress Report explains. http://www.californiaprogressreport.com/site/why-walmart-loves-welfare

According to Jesus Marin, one of the organizers outside the Grossmont store, about 15 participants were here to “support the employees so they can get better wages.” Countywide, according to Salsedo, there were 10 demonstrations, ranging from the East County to the North County. The College Grove Walmart had the most participants with about 60 people present.

ECM asked Marin about support from Walmart employees and specifically, Walmart’s claim that the number of workers supporting the actions is very small. Marin admitted , “We don’t have a big support ye,.” but added that  the “Our Walmart” campaign is actually run by Walmart employees who are seeking, most of all, self respect. View the website at http://forrespect.org/ 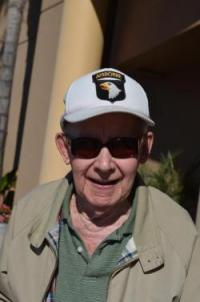 lies by forcing them to work on Thanksgiving this year.

It is also of note that at no time did any of these volunteers stop anybody from going into the store. They gave shoppers leaflets  and many also wore “I support Walmart workers” green stickers.

Walmart posted security at every entrance, from their management teams. They also had an hourly employee ask people to throw the flyers into the trash as they walked in. Some shoppers did, some did not and went on to buy their merchandise wearing these green stickers.

Why should Walmart consider raising the salaries of its employee? Wouldn’t that raise the cost of labor and in turn, those low prices?

According to a study by the Think Tank Demos there are several good reasons for the world’s largest retailerl to do this. http://www.demos.org/publication/retails-hidden-potential-how-raising-wages-would-benefit-workers-industry-and-overall-ec

The study estimated that if Walmart were to raise its employees’ average pay to $25,000 for a full-time, year-round employee would lift 734,075 people currently in poverty above the federal poverty line – including retail workers and the families they support. An additional 769,191 people hovering just above poverty would see their incomes rise to above 150 percent of the poverty line.

Raising these salaries would also help to prime the economy and actually create jobs. Here we are talking of a Gross Domestic Product increase in the range of $11.8 billion  and 15.2 billion dollars in the coming year, as well as the creation of 100,000 to 132,000 additional jobs.

But, what about the increased cost of labor? This is Econ 101, right? Well, given the increased demand, according to Robert Reich, former Labor Secretary, “in the end, retailers would benefit. According to the study, the cost of the wage increases to all major retailers would be $20.8 billion — about one percent of the sector’s $2.17 trillion in total annual sales. But the study also estimates the increased purchasing power of lower-wage workers as a result of the pay raises would generate $4 billion to $5 billion in additional retail sales." robertreich.org—36219730368

Only a fraction of that cost would be borne by Walmart, which last year generated nearly half a trillion dollars in total revenues, with nearly $16 billion  in profits. http://money.cnn.com/magazines/fortune/fortune500/2012/snapshots/2255.html . Taxpayers stand to benefit if major retailers opt to pay workers enough to keep them off public assistance.

“They could give better pay, Walmart could do that,” one employee told me today, but asked to remain anonymous.  Another worker said If Walmart did raise pay rates, they would have happier, more productive employees with more disposable income—people apt to spend much of that newfound income shopping at Walmart, thus increasing the retailer’s profits without forcing a rise in prices to consumers, critics of Walmart conclude.

Wal Mart should terminate the employment of any employee who does not work his or her schedule in order to take part in this so-called "educational" protest. Wal Mart is easy to pick on because they are the largest and most successful rtailer in America - ever. Where is the indignation for other national chains that require their employees to work on Thanksgiving? Or on any other holiday for that matter. What about the gas stations, supermarkets, drug stores, department stores, discount stores, shopping malls, etc? This pathetic plea for attention is merely an action being backed by union organizers, even though Wal Mart employees have turned down unionization attempt numerouis times over the years.

Walmart is setting the pace for the industry. They are the largest employer in the country. Also, it would make business sense to raise pay to a living wage. Most of that would be going back to Walmart anyway as employees would spend it.

instead you and I subsidize them, through tax breaks and the use of food Stan's and other services to employees provided by the government. It s not that employees are lazy, on the contrary,they work very hard for poverty wages. You could argue that part of the "success" for Walmart relies on corporate welfare.

As to stores being open on Thanksgiving, you got a point. But these companies use clever, buy now, specials to draw crowds in. If people resist the siren call, and not go...for the record, there are some services that need staffing 24/7365. Hospitals, emergency services, news bureaus, after that we should close all other...non essential services. We might make an exception for transportation. Otherwise, we should, as a culture, try to remember what these holidays were supposed to be. This speaks also of changing social values.

If none of us went there on Thanksgiving night, this would stop.

Both my kids work jobs where they're forced to be at work on major holidays. I hate it.  It's dsetructive of family life - it's impossible for our family to all be together even on Christmas Day or Thanksgiving most years.  We should have some consideration for the employees.  With a 4-day holiday weekend, there is no reason why people can't go shopping on Friday, Saturday or Sunday, and let workers have a day off with family on Thanksgiving.

While I can see a need for gas stations to be open to accommodate people traveling on Thanksgiving  Day, there is absolutely no justification for employees to have to miss family time on holidays jsut to accommodate shopping mania.  Let's get back to what holidays are all about, not the shop-til-you-drop craziness. Same with places like tourism attractions, movie thaeters, etc.  You have 3 other days for all of that --let workers have the holiday, too.

As for Walmart, the issues are worse than just the holiday hours.  Other retailers allow workers the dignity of working full time and provide them with healthcare. Walmart doesn't and taxpayers are stuck with the tab through MediCal, foodstamps and whatever other public assistance its employees need to survive. That's just wrong in my book, which is why I personally do not shop at Walmart.