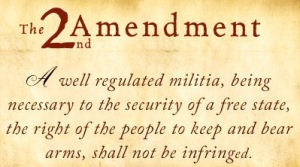 It is my notion that the right to bear arms is very similar to the right to smoke; they both have a cancerous effect that contributes to the decay in modern society. We as a society can continue to ignore and look the other way with temporary fixes that give the appearance of seriousness; however, the reality is: there are too many guns in the US; and our too-many-guns are being turned on us.

I believe all the suggested legislation on the table as of now might make it difficult to sell certain weapons; yet, it does not address the ability to steal weapons and really determine what type of individual will snap and commit violence. In my opinion, unless the second amendment is re-defined for the modern times, all legislative attempts to reduce violence may be futile.

I guess that would be?

The ACLU letting all the mentally ill roam our streets.

How about instead we just work to bring back the good old days?

"I can't take it any more. I need help." Shirley Chambers said, after her 34-year-old son, Ronnie, was shot and killed about 2:15AM in the 1100 block of South Mozart (Chicago) after attending a downtown "listening party" for rapper YK. After losing a daughter and two sons to gun violence, Shirley Chambers prayed and dreamed her only surviving child would grow to be an old man. But on Sunday evening, a day after Ronnie was killed, she was coming to the awful realization that she would need to buy another set of flowers on her regular visits to see her children at Burr Oak Cemetery (Chicago). Her 23-year-old son, Jerome, was shot to death outside a Cabrini-Green building in 2000. Two months earlier, a 13-year-old boy gunned down her 15-year-old daughter, LaToya, nearby. In 1995, a 16-year-old boy fatally shot her 18-year-old son, Carlos, on a sidewalk in the South Loop. They both attended Jones High School. "We need tougher gun laws, where people will know they will be in prison for a long time if they choose to pick up a gun and take a life," said Shirley Chambers.

This emphasizes our individual rights, rather than chips away from them as the writer advocates. We have the right to bear arms in order to protect our free country from a oppressive government. Taking away our constitutionally guaranteed rights is an oppressive act.