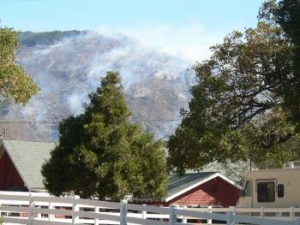 March 4, 2013 (Julian) – Julian’s all-volunteer fire department, faced with a budget crunch, is weighing a proposal to turn over firefighting responsibilities to the County Fire Authority. But some residents are voicing fears that they could wind up burned.

Dozens of firefighters and property owners packed into the Julian Town Hall Thursday night.  Many expressed concerns that out-of-town firefighters would not be familiar with rural areas and  may not find homes in a firestorm.  Relying on firefighters far away would also mean longer response times to fight fires in this historic mountain community.

Palomar Mountain Fire District Chief George Lucia came to warn the District not to join the County Fire Authority, as his District has already done. “If I could turn back time, I would never put pen to paper with the County,” Chief Lucas said, NBC news reported.  “I have regretted it every day since then.”

The San Diego County Fire Authority is NOT a fire department. The short part of a story going back five years is, the Board of Supervisors has convinced the public that the 15 million dollars they put towards fire protection works as well as the 230+ million spent by counties north of us. Since the public has swallowed this line there is no public pressure to do anything further.

The Palomar Chief hit it right on the nail. Not only has the County not helped small departments with this Fire "Authority" but it has in many cases decimated them. It seems the current plan is to put the load on Cal Fire and cripple the small volunteer departments and fire districts. Cal Fire has realized for some time now that they have been had with this arrangement but Sacramento, short of funds, is forcing local Cal Fire regions to take on these type A contracts so they get their cut in Sacramento. The moral at Cal Fire is lower than at any time in recent history.

The one positive effect of the County Fire Authority is high paying jobs for County employees in this new bureaucracy. Sound like a familiar story?

Look behind the curtain. The money the county gives CDF - ~$15 M a year - requires a four-fifths vote by the county supervisors in the annual budget.  How much longer before the 2003 and 2007 fires are forgotten and the three “downtown” supervisors return to the ”We in the cities pay for our fire protection, why don't they" argument.  Hold out for permanent funding.