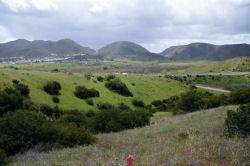 “The danger is that consumers will be required to pay for an expensive gas-fired plant they don’t’ need now or in the future.” – The Utility Reform Network

February 24, 2013 (San Diego) – Why is the San Diego County Taxpayers Association (SDCTA) pushing for a fossil fuel power plant that many authoritative sources indicate is not needed and will prove costly to taxpayers?

In a letter sent February 20, 2013 to the California Public Utilities Commission, Lani Lutar, president and chief executive officer of the SDTCA, urged the Commission to postpone a decision on the Quail Brush gas-fired power plant near Mission Trails Regional Park, until after the California Energy Commission has completed its examination of the project.

The taxpayer group voiced concern that “safe and reliable energy delivery may be threatened” asa the state transitions toward more renewable sources such as wind and solar, also citing concerns over the uncertain fate of San Onofre Nuclear Generation Stations (SONGS).

“SDCTA represents corporate interest, not the public interest and they are acting as a shill for SDG&E,” Collinsworth responded when asked for comment by ECM.  “If they were truly concerned about taxpayers and ratepayers they would oppose this scam to rip-off the public over $1.5 billion for plants that even the CPUC commission responsible says we don’t need.”

The prominent environmental leader added, “If SDCTA supported the public interest over the corporate interest they would publicly support efforts like Community Energy Districts and decentralized local solar power. Knowingly or unknowingly, SDCTA is perpetuating SDG&E myths intended to prevent real competition from clean decentralized/distributed local power. That is not in the taxpayers’ interest.”

Collinsworth pointed out that our region’s capacity to produce power is well over peak demand. Even if it wasn’t, the California ISO (CAISO) has made clear that Quail Brush and Pio Pico, a gas-fired plant proposed in Otay, “would not be deliverable, which basically means they cannot be counted for a local capacity requirement – to meet local capacity or system capacity requirements,” according to the California Energy Commission at an Evidentiary Hearing 07-AFC-6, on December 12, 2011, pages 58-61.

In a letter to CPUC lead commissioner Mark J. Ferron on January 3, a coalition of 10 local environmental organizations argued that there are superior alternatives to meet local energy needs.

Moreover, statewide, the peak one-hour load has stayed flat for the past seven summers, at about 4,500 MW – roughly the same as back in 1999.  The group includes charts to prove their points.

Weisenmiller claimed that his agency is striving to reduce “reliability consequences” of intermittent power generated by reneawbles and the potential permanent closure of San Onofre.

But Powers counters that Weisenmiller neglects to mention that the state already has enough gas-fired resources to meet variable output of solar and wind resources projected for 2020 “due to a decade of overbuilding gas-fired generators. “Moreover, the state has 4,00 MW of new gas-fired resources under construction—including 2,000 MW being built in the Los Angeles area slated to come online by summer—or roughly the same amount previously generated by San Onofre, which has been shut down for over a year with no brown-outs or grid reliability problems.

“The SONGS system reliability crisis that Mr. Weisenmiller alludes to has no basis in fact. The Southern California grid can clearly operate reliability without SONGS,” Powers concludes.

Powers also observes that taxpayers are being fleeced by the push for gas-powered plants.

Sierra Club has also weighed in, concluded that “this scheme would built natural gas plants that we don’t need, cost ratepayers more than $1.5 billion, and generate vast quantities of greenhouse gases. It would also be a giant step backward for San Diego at a time when our local clean energy industry is thriving,” Sierra Club states in a February 14 press release. The group notes that San Diego County leads the nation with 15,000 rooftop solar installations and that a bipartisan group of local elected officials including Supervisor Dianne Jacob, San Diego Mayor Bob Filner, and San Diego Association of Governments Chair Jack Dale all oppose SDG&E’s proposal for Quail Brush and Pio Pico.

The League of Women Voters and The Utility Reform Network (TURN) also have urged the CPUC to reject the fossil-fuel powered plants as dirty and unnecessary.

TURN, in a letter February 1 to Governor Jerry Brown, asked the Governor to push the CPUC to turn down the applications, noting that the state is “already building thousands of megawatts of gas-fired plants, despite having a large reserve margin. ‘There is no danger that the lights will go out if the PUC rejects …the Pio Pico and Quail Brush plants,” TURN wrote. “The danger is that consumers will be required to pay for an expensive gas-fired plant they don’t’ need now or in the future.”

The San Diego City Council voted UNANIMOUSLY in September 2012 AGAINST this power plant.

Councilwoman Sherri Lightner stated that the applicant would be showing good community involvement with San Diego if they were to WITHDRAW their application.

Lori Ziebart, Cogentrix Representative, threw the gauntlet with her oily glove, into the face of Councilwoman Lightner and said "No, we will not withdraw our application."

It's ludicrous, and in respect to our ongoing worldwide cataclismic global-warming climate problem, it's suicidal.

Let's show Ms. Ziebart and the rest of her North Carolina cronies the door, shall we?

The next opportunity to do that will be the CPUC meeting on March 21st at  5520 Overland Avenue, San Diego, CA 92123.  Join us at 8:00 AM for a rally.  The meeting starts at 9.  If you want to speak in front of Commissioner Peevey (the ex-president of a UTILITY company who SHOULD be recusing himself altogether), get there early.

Seriously, if you care about Mission Trails at all, you'd better get over there and weigh in because we're fighting greedy people with lots of money.