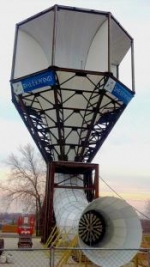 INVOLEX works by funneling the wind it catches into a ground-based generator. The speed of the wind is increased as the funnels channel it into a narrowing passage. The wind then passes through the ground-level generator. SheerWind claims that because of this new method, the energy output would be greater than that of a traditional turbine.

If INVOLEX is able to produce power with slower wind speeds, it could be used in more areas including urbanized locations, so natural habitats could be spared from destruction.

The SheerWind website also contains testimonials form several professors who worked on the turbine design. Professor Yiannis Andreopoulos stated that at first, he was skeptical of the technology. However, he said that his doubts were cleared once they built and tested their own model at the school. Professor Ali M. Sadegh stated that after initial testing, the turbine showed great promise. But INVOLEX is not the only claimed solution to todays wind turbine problems

Without blades, the Saphonian claims to eliminate noise pollution and all dangers to birds. It is also intended to store excess energy, in order to provide power during times without wind.

It would be interesting to know how much less land these turbines require than a standard turbine wind farm. It would have to be significant for them to be worth looking into.