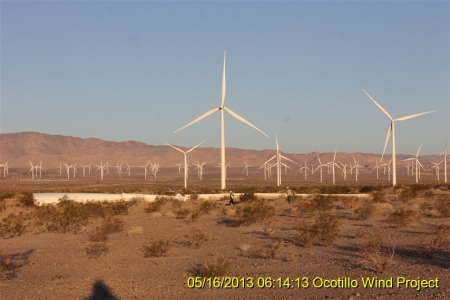 ECM photographer and aerospace engineer Jim Pelley discovered the fallen blade before dawn this morning when he looked out from his front porch eastward and saw the enormous blade, which has a span the length of a football field, lying on the desert floor.  “It came down on its point and then fell over, about 150 feet from the turbine,” Pelley told ECM.

Pelley and another photographer, Parke Ewing, a former construction manager, advised that workers were attempting to block public access to the site. The two have been documenting construction issues 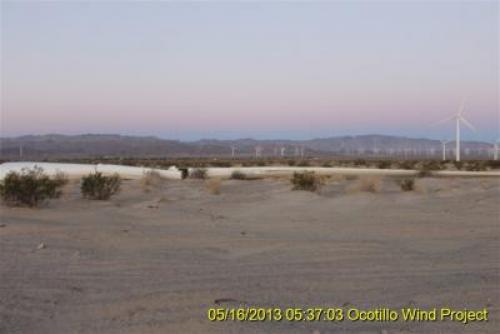 at the site for months and have long warned of a possible turbine collapse or blade failure.

Pelley said the fiberglass blade, filled with wood, pulled free of the mounting assembly and snapped off.

"A B53 rotor blade of a SWT-2.3-108 wind turbine broke off near the blade root and fell to the ground at the Ocotillo Wind project in California. No one was injured.

Siemens Energy has immediately convened a team of experts at the site who will examine all facets of this incident, including the production, installation, commissioning and service of the blade, which is under warranty by Siemens Energy."

The statement continued,  'Siemens does not yet know the root cause of this incident and is working to determine if and how this is related to a recent similar incident in Iowa. Today, Siemens is taking the step of curtailing all turbines with the B53 blade type globally. These turbines will remain curtailed until it can be determined they are not at risk of a similar malfunction. As the inspections and analysis progress, Siemens will make further determinations on curtailment protocols."

Accidents with Siemens blades at other wind projects

ECM found other cases of turbine collapses and blade failures involving Siemens equipment.  In March 2010, a Siemens blade snapped off at Scotland’s largest wind farm, bringing the facility to a halt.  In 2008, a Siemens turbine in Oregon collapsed, killing  Chadd Mitchell, a worker who was also a young father and military veteran.  Siemens paid a $10,500 fine.  In April 2013, a blade snapped off a Siemens 2.3-108 turbine in Iowa.  That’s the same model as the turbines in Ocotillo that lost a blade this morning.

Siemens recently exited the nuclear business after the Fukushima meltdowns.   The company has had its own share of problems with its nuclear products including turbine blades that snapped off at a Michigan nuclear plant.

The company is involved in numerous business enterprises including wind, solar, telecommunications, medical and building technologies among others.  Siemens Industry Inc. has offices in San Diego. Seimens also has been involved in business ventures with SDG&E.

In his 2013 State of the Union speech, President Barack Obama praised Siemens for providing jobs in renewable energy. He has also toured a Siemens wind energy manufacturing facility in Iowa in 2010, shortly before Michelle Obama’s spokesperson left the White House to take a job with Siemens.

Such praise came despite Siemens’ corporate track record of corruption.  The company has since announced major layoffs: http://www.bloomberg.com/news/2013-03-19/siemens-said-to-prepare-1-400-job-cuts-amid-profitability-push.html 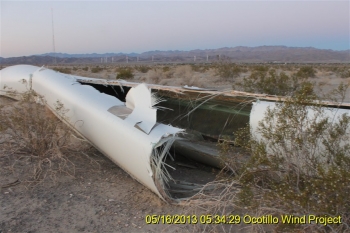 Despite these findings, Siemens was not barred from securing public contracts in the U.S.  If Siemens had been banned from public contracts, the turbine blade accident in Ocotillo could have been prevented.

Another New York Times story in December 2011 detailed a decade-long era of Siemens executives engaged in “shell companies, Swiss bank accounts, double-crossing middlemen and cash being smuggled across borders” among other things.

In China, the Siemens bribery scandal resulted in a death sentence against a government official.

Siemens own SEC filing from November 2008 reveals a few of its troubles at the time, including allegations that also included embezzlement, money laundering and tax evasion.  For example, the public prosecutor in Greece was investigating alleged bribery of public officials and money laundering co nnected to a telecom contract for the 2004 Olympic games awarded to Siemens.  Norway’s public prosecutor was investigating payments by Siemens for golf trips for Defense Department officials.  German prosecutors alleged Siemens paid improper benefits to ex-employees of Enel.

Germany convicted two former Siemens officials for bribery in 2007, ordering the German engineering giant to pay $51.4 million in the first of several trials. Two additional officials were later found guilty but evaded jail time, including paying bribes to secure gas turbine contracts with Enel, to cite just some of the corruption prosecutions.  Siemens’ finance chief was also convicted of authorizing kickbacks in 2007. 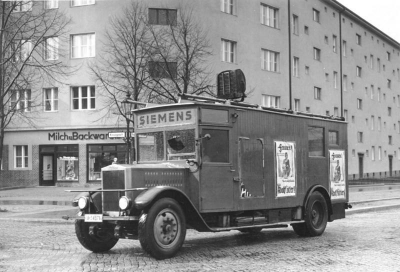 The past decade of corrupt practices is not the first time Siemens’ corporate ethics have come into question.

Among other things, the slaves reportedly built electric switches for Siemens-manufactured V-2 rockets used to bomb Allies during World War II. Thousands died in the manufacture of the rockets.  http://www.v2rocket.com/start/chapters/mittel.html

A 1932 photo from a Berlin newspaper showed a Siemens truck used for Nazi propaganda.

Siemens recently drew additional scandal by seeking to register the trademark “Zyklon.”  Zyklon B was the poison gas insecticide used in Nazi gas chambers to kill people in concentration camps.  Bosch, a consumer products company owned by Siemens, also filed a patent application in the U.S. for gas ovens bearing the Zyklon name.

“Siemens should know better because it was directly complicit in the use of slave labor,” said Dr. Shimon Samuels with the Simon Wiesenthal Center, a Jewish human rights group.  “This is a major, major scandal.”