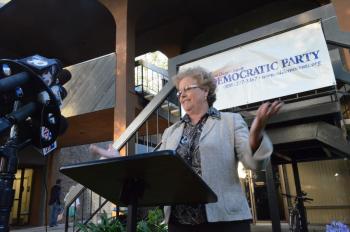 The party is committed to make this inclusive vision a reality. “We have listened to Democrats with strongly held views on both sides of this issue.” She did say that those Democrats, on both sides, are committed to the "Progressive agenda that we elected Mayor Filner to champion.”

Busby added that the party believes that both the Mayor and his accusers will have a fair hearing in the legal process now unfolding. While they are not in a place to determine guilt or innocence, “in the best interests of the city the San Diego County Democratic Party has voted to ask Mayor Filner to step down.”

She added that it is time for the Mayor to seek the help he needs, and to deal with his legal issues, chiefly, “to allow the City of San Diego to move forward.”

When asked about Filner’s reticence to resign, Busby replied “The vote sends a strong message to Mayor Filner that he should step down.”

A prepared statement issued later by Busby, however, leaves ambiguity in just when the Mayor should step down.

"At this time, we have no consensus on whether Mayor Bob Filner should resign before his accusers go public and an independent investigation determines all the facts of this case," the statement reads. "However, I can share some broad areas of agreement among Democratic Party leaders. We unequivocally condemn sexual harassment and workplace intimidation. We abhor the actions he is alleged to have taken against women, even as we recognize that all the individuals involved have a legal right to a fair hearing.The Mayor has betrayed the trust of the people of San Diego. These serious charges, if shown to be true, are grounds for immediate resignation. The Democratic Party will continue to monitor this situation and take further steps as warranted."

An earlier vote last week split 24-24. Since then,  a lawsuit has been filed against the Mayor by a staffer and a half dozen or so more women have come forward to identify themselves and allege harassment or unwanted advances. These women include a retired admiral and a college dean.

Busby said the party is now ready to move forward if a special election is called and stands prepared to run and elect another progressive to the Mayor’s office to continue the agenda of going back to the neighborhoods. “However we have not taken any formal positions on that,” she clarified, “and this is now an issue for the people of San Diego to decide.”

As to the possibility of Council President Todd Gloria becoming Mayor short-term if the Mayor resigns, Busby commented, “This is not political, that is policy. We are going to elect another progressive Mayor.”

While the Central Committee’s vote has no force of law, it is highly significant, since the Mayor has now lost the support of the core members of the Democratic Party, as well as San Diego residents in general if recent polls are a valid indication.

According to Busby, before the vote there “was limited discussion,” with three speakers allowed in favor and three against. “We took a vote, there was no drama and it was over quickly.”

The Central committee has  60 voting members, but not all could attend on short notice. “There were 40 here, that was a quorum,” Busby confirmed. 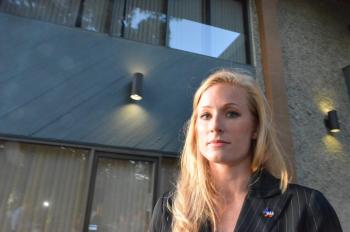 While not a voting member, Laura Fink is a Democrat, and she was present at the meeting. According to Busby, “she felt gratified that the party understood the severity of the situation.”

Later Fink addressed the media, stating, “I wanted to be a presence tonight and be a reminder.”

Fink also said that she “wanted to stand by my statements.”

Fink addressed the four women interviewed today by KPBS to reveal new complaints,  including Joyce Gattas dean of the College of Professional Studies and Fine Arts at SDSU.

Fink was asked about Rear Admiral (ret) Veronica Froman. Fink said that she is a “respected, woman of integrity and prominence, I think it took a lot of guts to come forward a private person and I appreciate her statements.”

Fink said that “all those four women are pretty amazing. Look what they have accomplished. We have a Dean of SDSU. We have two businesswomen, we have a former `Navy Mayor’ of San Diego. These are women who are respected and who are prominent community members and they all called for the Mayor’s resignation.”

She praised them for coming forwards and for calling for other women to come forward.  Fink believes there are more and that “this is what will put an end, and hopefully make it better for our daughters, make it a little better for our sisters, that this doesn’t happen again,” and if it does there will be recourse.

She added while Irene McCormack Jackson is constrained by the terms of her lawsuit, “I am not. I am past the statue of limitations.  I do not intend to file a lawsuit, so I can speak to all of you and to San Diegans about this.”

When asked about other women, she said that there are other stories “about credible, wonderful women that have experienced problems at the hands of Bob Filner.”

As for those dismissing what she alleges happened to her, (a pat on her behind) as an off colored joke, Fink believes “we live in the modern age and you are not allowed to touch women.”

Fink hopes that we are starting to see a paradigm shift in not accepting sexual harassment.

She believes that this “is about power. It is incredibly hard to come out and be a lone voice.” She added that this is not just happening in the political arena, but also in other professional arenas. Positions of power “enable you to perpetrate these types of crimes, and they also instill silence in the victims.”

As to whether Filner will resign or not, Fink said, “Bob Filner is one of the most stubborn people I have ever met, and I see him holding on to the power of the Mayor’s office.” But she hopes he will step down.

“He has lost the public trust,” she concluded. “It is time to do the honorable thing, to do what someone of character should do.”

Filner's as ugly on the inside as he is on the outside (and that's really sayin' something). This demand is, of course, welcome but somewhat overdue.