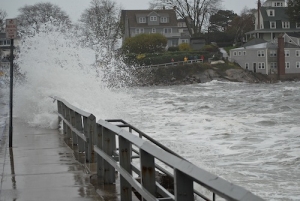 July 29, 2013 (San Diego) -- Dear EarthTalk: Hurricane Sandy brought more sea water onto shorelines than I’d ever witnessed before and many communities near where I live are now being required to raise their homes up. What is the prognosis for sea level rise in the years immediately ahead?

Since sea level measurements were first recorded, in 1870, global averages have risen almost eight inches. The annual rate of rise has been 0.13 inches over the past 20 years, which is close to twice the average from the previous 80 years. Future estimates for sea levels vary according to region but most Earth scientists agree that sea levels are expected to rise at a greater pace than during the last 50 years.

Predicting the amount of rise is an inexact science and depends on many factors including climate change and ice sheet flows. The U.S. National Research Council predicts a possible sea level rise of between 22 and 29 inches over the 21st century in the U.S. Sea levels are anticipated to continue rising for centuries.

According to the U.S. Environmental Protection Agency (EPA), land elevation changes also have a large impact on the effects of rising water levels. Subsidence (sinking) or uplift (rising) of the land can help determine the relative sea level rise. The EPA’s relative sea level estimates, assuming a two foot global sea level rise by 2100, are 2.3 feet at New York City, 2.9 feet at Hampton Roads, Virginia, 3.5 feet at Galveston, Texas and one foot at Neah Bay in Washington state.

The main factors contributing to sea level rise are thermal expansion (created by an increase in ocean water temperatures) and the melting of ice caps and glaciers. Human activities, such as the burning of fossil fuels, combined with natural activities, have contributed to the rise of the earth’s surface temperature over the past century. According to National Geographic, about 80 percent of this additional heat is absorbed by the oceans. The above factors are well studied, but more research is still being done on how climate change will impact large ice sheets in areas such as Greenland and the Antarctic. An extra foot of sea level rise could be a possibility depending on what happens with these larger ice sheets.

Even small changes in sea levels can have adverse effects on coastal areas. Erosion, flooding of wetlands, aquifer and agricultural soil contamination and habitat loss for fish, birds and plants are all problems resulting from rising sea levels. Also, higher sea levels usually mean more destructive weather events as storm surges get bigger and more powerful and devastate everything in their way. Coastal communities will suffer the most, as flooding from rising water levels will force millions of people out of their homes.

As for what can be done, reducing our collective carbon footprint is no doubt the first and most important step. Individuals should drive and fly less, walk and bicycle more and take advantage of public transit. But sweeping policy changes will have the most impact: A recent commitment by the Obama White House to require coal-burning power plants and other large industrial operations to minimize greenhouse gas emissions should finally help get the United States started on the right track, but many wonder if such moves represent too little too late.

and you can read their warnings about impacts of rising seas on Southern CA here:

--Hurricane Katrina, a category 3 at landfall in Louisiana, produced catastrophic damage with a 28-ft. storm surge

--Hurricane Irene, a category 1 hurricane at landfall in North Carolina, produced extensive damage with an 8 to 11 ft. storm surge

Looking forward to having beach front property here in Campo.