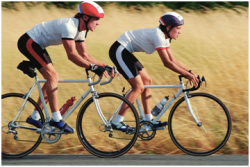 The law applies only to highways, not surface streets.  It will take effect September 16, 2014.

My take on this new law is great for the bikers and proves needed. But in my experience most of the riders in our area seem to think that the whole road belongs to them! Even when there is plenty of bike lane provided for them they ride in the middel of the lane and some refuse to move over to let cars pass safely. Many of the old hwys have very limited passing areas because of the winding roads. So in this situation what would you do? Has any one else been frustated by this rude attuide to. Any feed back ? Should the biker be find as well for not following the law by not getting out of the way and not useing the bike lane provided for them?