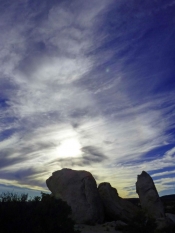 The POC originally filed a Motion for Summary Judgment in August 2013. This week marked the first hearing under the U.S. District Court. According to Plaintiff Donna Tisdale, POC’s attorney Stephan C. Volker had prepared for a one hour argument and was surprised by the Judge’s announcement that she had a tentative ruling in hand. The judge read that ruling aloud, took a 15 minute break for attorneys to prepare a response.  Each side was then allowed a half hour to argue their points and one minute for rebuttal.

No copies of the tentative ruling were distributed at the hearing and none are currently available.

Judge Sammartino discussed the court’s findings, which aligned with BLM’s approvals that the plaintiffs did not make adequate acknowledgement of most of the items listed, including:

Although ECM has reported the concerns of residents about fire hazards, that issue was not discussed at Monday’s hearing.

The hearing was to hear oral arguments for and against the initial court findings. A final decision by Judge Sammartino will be made after careful analysis, hopefully within the next few days.

POC’s lead attorney, Volker, spoke of the impact of infrasound noise, which is very low frequency and often below hearing range. It has been cited for causing anxiety, uneasiness, nervousness, headaches, night terrors, sleep problems, ringing in the ears, memory problems and feelings of pressure on the chest. Complaints similar to those have been made by residents living around the Kumeyaay Wind and Ocotillo Wind turbines.. According to an MIT study, the rapid spinning of wind turbine blades can produce sound and vibration, as well as disruption in air pressure, that lead to infrasound problems. It is thought to be a cause of bats dying near wind turbines.

The attorneys representing the Bureau of Land Management refuted the plaintiff’s complaints, saying that the Environmental Impact Studies (EIS) did adequately address each issue.

“The Tule Project will provide 186 MW of clean, renewable energy and provide a number of jobs,” said the BLM attorney.

They also argued against the negative impact of infrasound on humans.

“Scientific studies indicate that only audible noise impacts humans…there is no evidence in the literature of any health effects from infrasound noise.”

One plea from the attorneys representing the POC was the lack of discussion of distributed energy, i.e., any discussion of better alternatives that would be more cost effective and better for the environment.

“The EIS completely swept aside any talk of alternative, distributed energy projects, such as rooftop solar ,” said Volker.

There was disagreement about the effect the project would have on migratory birds, specifically the golden eagle. Volker indicated that in the EIS, Tule estimates that up to 37 raptors per year might be killed. Mr. Martin, attorney for the BLM, stated “It is unlikely that any eagles would be taken.”

The project’s EIR relied on studies conducted by now-discredited raptor expert David Bittner, who was convicted in federal court on various raptor-related violations including illegally taking a golden eagle and refusing to turn over tracking data on eagles to the U..S. Fish and Wildlife Service after taking money from energy companies, as ECM previously reported.

Judge Sammartino took all arguments presented and will return with a final verdict soon on the fate of the Tule Wind Project proposed for BLM lands.

In a separate process, as reported earlier by the East County Magazine, on December 16, the U.S. Bureau of Indian Affairs (BIA) signed a Record of Decision approving a lease for Phase II of the Tule Wind Project for turbines proposed for Ewiiaapaayp tribal lands. (http://eastcountymagazine.org/node/14642).

The POC sent a letter to the BIA in early 2013 asking the agency to withdraw its approval due to legal violations, threats to legally protected migratory birds, including golden eagles and other raptors, and an inadequate response to concerns raised by federal and state wildlife agencies.

Tisdale, secretary of the POC, expressed her frustration.

“We are so incredibly frustrated that the court system continues to condone and allow the BLM the BIA and others to willfully ignore all the harm that these massive wind turbine projects inflict on impacted residents, wildlife, recreation,  conservation areas, and more," she said.

I was there, but I'm not familiar with legal proceedings. Judge Sammartino kept reminding us that the BLM was entitled to difference. To me, it seemed the BLM was able to dismiss important issues from further analysis altogether, like Distributed Energy, based on their initial findings. This seemed to me to be a way of "rubber stamping" certain issues from the "get go" to be unworthy of further analysis and public consideration. It was also stated that there are NO State standards limiting exposure to EMFs. Is this true? The bird studies opted for by the BLM were based on the proportion to their significance. That about say it all right there, doesn't it? They did no nocturnal studies. After all, if too many birds get KILLED, they can mitigate it AFTERWARDS, like Duke Energy is. That's always the best way to handle things, right? ;)
If the judge used the words "my tentative ruling is..." Then it was a tentative ruling. Usually a tentative ruling includes some sort of decision in favor of one party or the other. Oral argument can be heard on the issues subject to the tentative ruling. Because you are using the words tentative ruling and final ruling I am guessing there was a tentative ruling. I'd like to know in what it said. Thank you for covering this and I hope we hear some more I for action on the possible ruling soon.
What was the tentative ruling? Was anyone there that heard it? I understand there were not any written copies but did the judge indicate if she was ruling for or against the plaintiffs?
Gattobello, "Judge Sammartino took all arguments presented and will return with a final verdict soon on the fate of the Tule Wind Project proposed for BLM lands." Are tentative rulings done deals?
Generally courts will stay with their tentative rulings.