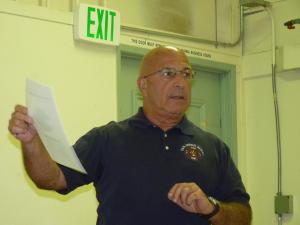 The County has threatened to take away funding from the Rural Fire district if it would not dissolve, leaving many board members and residents feeling there was little choice but to acquiesce to the County’s wishes.

Board member R. Terry, in a previous meeting, said that if the district remained independent, they would have to do this without the $3.2 million the County provides, and they will have to rely on “the $1 million we collect.”

The County has contended that consolidation of fire districts in rural areas would lead to better coordination and improved fire protection, but not everyone agrees with that forecast.

Some communities have resisted County takeover of their fire districts, notably Julian, which raised funds from a private donor to remain independent.

Russo had asked the District to fund a meeting with the District’s consultant to discuss the LAFCO protest process, but his request was denied by Dale Amato. Amato stated in an email to Russo that board members “should all be pulling in the same direction” and that any protest spearheaded by Russo should be on his own dime, not at taxpayers’ expense.

Russo fired back, “The majority opinion is not by nature the “correct” opinion. A minority opinion is vital to democracy,” adding, “The protest process is designed to put MORE of the decision into the hands of the citizens of the district.”

Russo has asked that the matter be added to the agenda for the next RFPD meeting.

What they lack as a "fire department", everything, they more than make up for as control with absolute power. The Mafia would be proud of the San Diego County Board of supervisors. To bad the citizens of the County could care less.